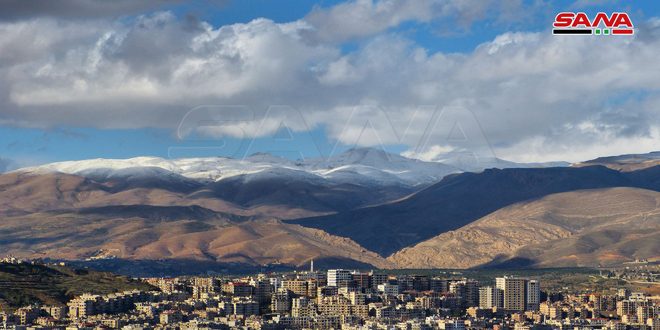 Damascus, SANA-Temperatures will continue to drop to become from 3 to 5 degrees below average, as the country is affected by a superficial low air pressure accompanied by wet and cold air mass in all layers of the atmosphere.

Meteorology Department expected in its Wednesday bulletin that the skies will be partly cloudy to rainy in most areas, and snowy over the north areas and mountains over 1000 meters.

The Department added that the weather will be very cold at night, warning against frost and fog in most regions. The wind will be western to northwestern, while the sea waves will be low in height.

Rain fell in all Syrian provinces during the past 24 hours, as the heaviest rain amounts have registered 70mm in Quneitra province.

According to the rain bulletin issued by the Ministry of Agriculture and Agrarian Reforms, the rain amounts in the Syrian provinces reached 60 mm in Damascus and its countryside, 32mm in Sweida, 25mm in Daraa, 61mm in Homs, 45mm in Hama, 46mm in Tartous, 30mm in Lattakia, 35 mm in Idleb, 29mm in Hasaka and 5mm in Deir Ezzor.