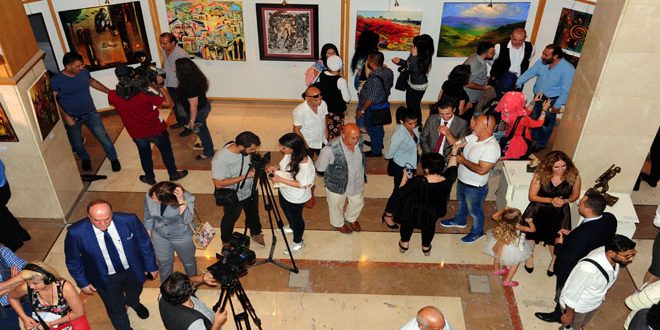 Damascus, SANA – The collective exhibition “Resistance is our Choice” currently held at Dar al-Assad for Culture and Arts highlights the key role of culture in protecting the Arab identity, strengthening resistance and enhancing steadfastness through word, painting, tone and color.

The exhibition which lasts till July 26th conveys a message about adhering to Resistance as the only choice for free people who reject injustice, aggression and obscurantist ideology which the Zionist entity attempts to spread in the region.

The paintings are inspired by the Syrian and Arabian beauty and spiritual serenity away from devastation and destruction and they have been created using brighter colors to reflect hope.

On the sidelines of the exhibition, Assistant Minister of Culture, Ali al-Mubaiyed stressed the Ministry’s keenness on hosting cultural events which bring the essence of resistance into spotlight.

The event will wrap up activities with a musical concert for the Lebanese Philharmonic Orchestra at 6:00 pm at the Drama Hall of Dar al-Assad for Culture and Arts.