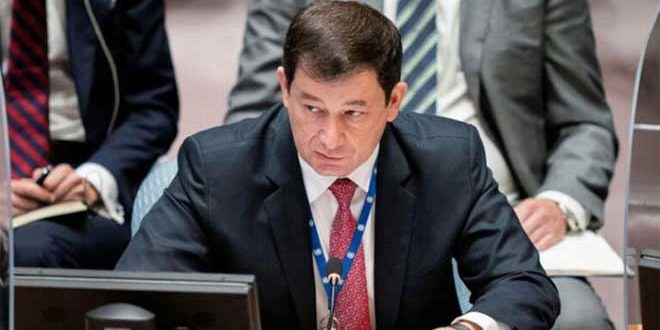 New York, SANA- The Russian mission to the United Nations called on Friday for an urgent session of the Security Council today to discuss the US biological activity on Ukrainian territory.

“The Russian mission requested a meeting of the Security Council today to discuss the biological military activities of the United States on the territory of Ukraine.”, Russian RIA Novosti news agency quoted the First Deputy Permanent Representative of the Russian Federation to the United Nations, Dmitry Polyansky as saying on Twitter.

“The purpose of this and other Pentagon-funded biological research in Ukraine is to create a mechanism for the covert spread of deadly pathogens,” Russian Defense Ministry spokesman Igor Konashenkov said on Thursday.

He pointed out that the US, Ukrainian and Georgian laboratories are conducting a project near the Russian borders in which bats are considered as carriers of biological weapons.

State Duma member Nikolai Novichkov said that Russia may request the convening of an international tribunal on biological laboratories in Ukraine.