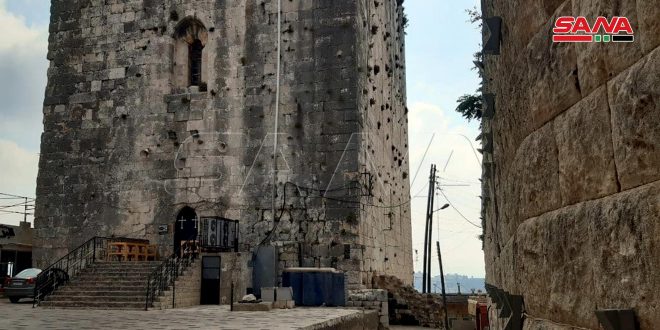 Tartous, SANA – Safita Tower is located in the middle of Safita city in Tartous province overlooking several castles and fortresses and rising 419 km above sea level.

The tower is considered one of the most significant archeological monuments in the city as it is a witness to the authenticity of urban art in it.

The tower had several names throughout history, where the Crusaders called it Chastel Blanc which means “white castle” because the stones of which were built from white limestone.

Assistant director of Safita Antiquities Department, Samah Dayoub told SANA reporter that the tower is 27km away from Tartous city and it was built in Roman-Byzantine times on Phoenician foundations overlooking the Akkar plain and the mountains of Lebanon.

“The tower was hit by devastating earthquakes between AD 1071 and 1202. and its fortification in its present form is likely due to later times, ”said Dayoub.

Dayoub noted to the significance of the tower site in Safita city throughout the history where it formed a natural corridor inside Syria and separated the coastal mountain range, overlooking Akkar Plain, from the Lebanon mountains and formed a passage for the Phoenician Arwad residents in Tartous to Husn Suleiman.

Safita Tower was built on the highest hill of the city, 100 feet above ground level, in which the basement was used as weapons caches, According to Dayoub.

She added that the ground floor of the tower has a church whose architectural art style dates back to the first half of the 12th century.

The first floor was dedicated to the accommodation of the knights, consisting of two sections separated by 3 pillars of huge columns in the middle, and a hall divided into four sections of 11 windows for shooting arrows.