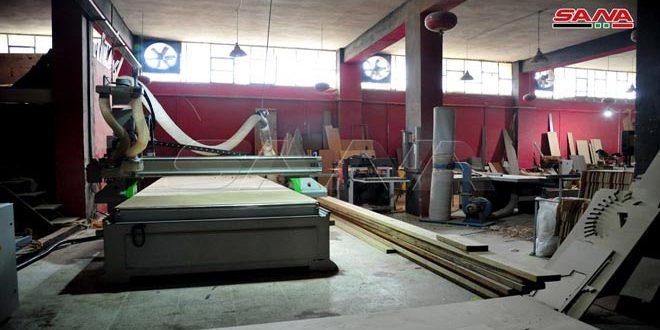 Damascus Countryside, SANA- The “Fadloun 1” and “Fadloun 2” industrial zones, which were damaged by terrorism, have made progress during the past three years in terms of the service situation and the process of production despite all the difficult circumstances and obstacles resulting from the unjust economic blockade and unilateral sanctions imposed on the country.

Solid will and patriotism were the biggest incentive for industrialists in the two zones to restore their destroyed facilities and factories through the coordination and support provided to them by Damascus Countryside Governorate and other bodies concerned which have worked on rehabilitating the infrastructure and providing other services as soon as possible in a way that has contributed to the return of normal life to the two zones and the resumption of production gradually.

Dr. Eng. Salem Hourani, owner of a metal production company, considered that Syria is in a pressing need for his expertise, which made him return to his country to invest in the production of spare parts for factories.

He said: “I have managed with the factory team after two years to form metals and spare parts which all factories and industrial establishments need at the public and private sectors.”

Hourani said that now he provides about 70 percent of the market’s needs of these spare parts, such as special tiles for lining furnaces in cement factories and factories mills.

Industrialist, Mohammad al-Sous said that he returned to work with the entry of the Syrian Arab Army to the zone and he was able, with simple capabilities, and over a short period of time, to gradually resume work and production.

Ayham al-Suqi, director of a decoration factory, noted that return of services to the zone was the basis for work, stressing that he was able to renovate his factory and resume operations of some of the production lines.

Construction supplies such as paints, iron and wood were one of the industries that have proven their presence in Fadloun 1 and Fadloun 2, according to Ahmed Salem Hamami, who began to produce various types of paints months ago.

Imad Baghdadi, who is specialized in packing and distributing raw materials for manufacturing detergents, said that the difficult circumstances have not prevented him from continuing production throughout the years of the terrorist war despite the low production rate due to the blockade and the problems related to securing electricity.

Engineer Asaad Khallouf, Director of Industrial and Crafts Zones in Damascus Countryside Province said that the industrial zones in the province have been damaged by terrorism.

Khallouf said that since the beginning of 2017, various services and infrastructure, including water, electricity, sewage, telephone and roads have been re-operated again in order to encourage industrialists to return and start work.

He added that after securing all services, more than 50 percent of the industrialists have returned to Fadloun 2 Industrial Zone which used to include more than 700 facilities before the terrorist war waged against the country.

Mohammad Haitham Mansour, Head of Local Council in al-Sabineh City, said that the council has showed a lot of cooperation with industrialists and has granted them all the required facilitations.

Mansour noted that licensed projects will be carried out in the sanitation sectors and the streets that will start next summer, indicating that the sewage pipes in Fadloun1 have been maintained.