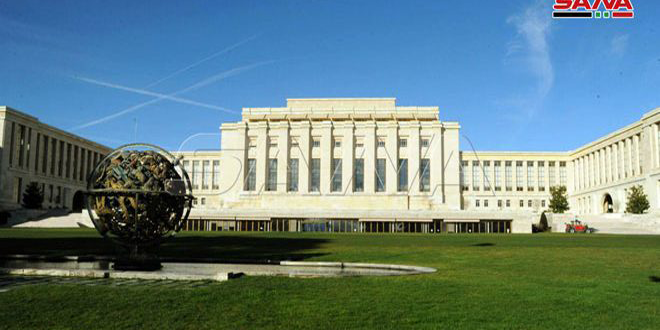 Geneva, SANA- The Committee of Discussing Constitution continued on Friday the meetings of the 4th round for the 5th day in a raw at the  UN headquarters in Geneva with the participation of the national delegation and other delegations.

The 4th round of the Committee’s meetings started last Monday in Geneva as the national delegation has underlined the necessity of adopting the issue of return of the refugees as a “basic national principle” for its importance on various levels, mainly on the humanitarian level.

Members of the national delegation called on some countries to stop politicizing this file, in addition to emphasizing two basic national principles, which are the humanitarian file and the issue of lifting the illegal sanctions imposed on the Syrian people.

The 3rd round of the meetings of the mini-committee was held at the UN headquarters in Geneva last August and it came within an agenda titled “Basic National Principles” while the first and the second rounds were held in Geneva during November last year.

2020-12-04
hybah
Share
Previous On their day, a particular bike path for disabled persons in Barniyah street in Damascus opened
Next One of QSD militants killed by bullets of unknown persons in south of Hasaka