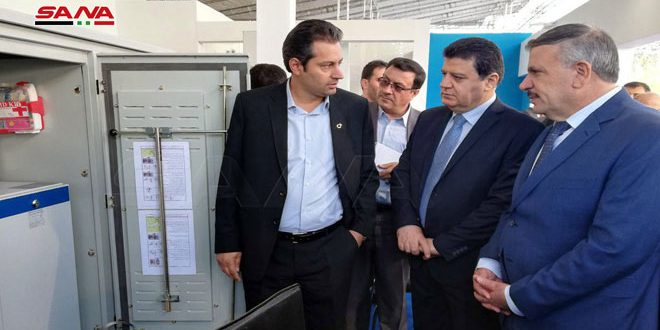 Tehran, SANA- The 19th Iran International Electricity Exhibition has opened in Tehran with participation of about 460 companies.

Electricity Minister Mohammad Zuhair Kharboutli, who is paying a visit to Tehran, toured the exhibition to get acquainted with the latest developments in the Iranian electricity industries field and the possibility of benefiting from them and strengthening the electricity sector in Syria.

In a press statement, Kharboutli pointed out that a number of contracts were signed with some companies , adding that other contracts, that would contribute to developing the electricity system in Syria, will be signed later.

He stressed that there are aspirations to carry out either solar or wind renewable energy stations and projects.

The Electricity Minister  indicated that he discussed with Iranian Energy Minister Reza Ardakanian the establishment of a strategic partnership in Syria to produce some electrical equipment.