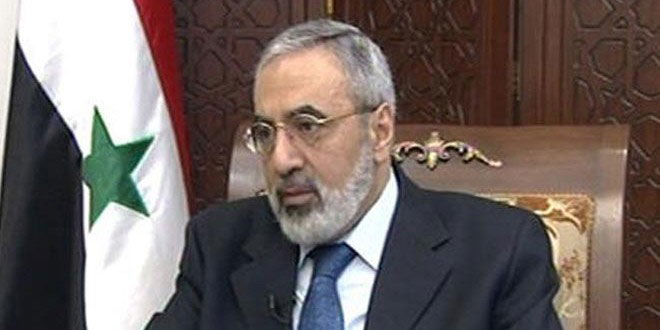 Damascus, SANA – Information Minister Omran al-Zoubi said that Saudi Arabia and Turkey issued instructions to terrorist organizations in Syria to attack civilians and the Syrian Arab Army in Aleppo city, noting that whenever terrorists and their backers fail in one area, they try to escalate the situation in another.

In a phone call with al-Ikhbariya TV on Tuesday, al-Zoubi held the Saudi and Turkish regimes legally, politically, mortally, and criminally responsible for the bloodshed that has been taking place in Aleppo city throughout the past few days, adding that they are also responsible for everything that’s happening in Syria.

He also noted that over 6,000 terrorists entered Syria from Turkey two weeks ago.

The Minister condemned the terrorist attacks on the residential areas in Aleppo, stressing that protecting Aleppo is the duty of all Syrians, adding that the main topic of the Cabinet’s meeting on Tuesday was the situation in Aleppo.