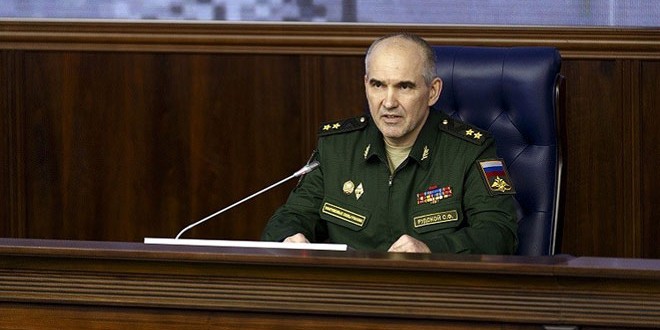 Moscow, SANA-General Staff of the Armed Forces of the Russian Federation announced on Monday that the Turkish regime still supports Jabhat al-Nusra terrorist organization and provides it with weapons and terrorists.

“Although an advance has been achieved in the cessation of hostilities, the Turkish side still sends weapons and gunmen to groups affiliated to Jabhat al-Nusra,” Lieutenant General Sergey Rudskoy, Chief of the Main Operational Directorate said.

“Two armed groups including more than 100 members arrived in Handarat camp, north of Aleppo, along with a tank and 22 Four-wheel cars loaded with machine guns, while nearly 200 gunmen have arrived in Tal Hadyah town in Aleppo northern countryside,” Rudskoy added.

Meanwhile, Russian Deputy Defense Minister Anatoly Antonov reiterated that the main task of the Russian air forces didn’t change after the decision of the partial withdrawal from Syria, represented by putting an end to terrorism.

“The Russian military operation has given a lot of outcomes, mainly dealing a blow to terrorism, eliminating a large number of terrorists and removing much of the caches,” Antonov told Russia Today TV in an interview.

He described liberating Palmyra from ISIS as “an important turning point” in the war against terrorism.