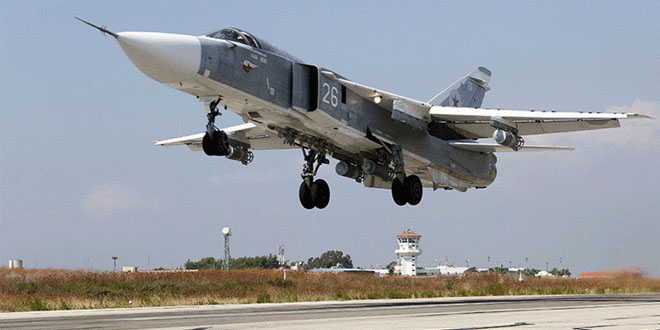 Lattakia, SANA – The Russian Defense Ministry said on Wednesday the Russian Aerospace Forces carried out 16 sorties targeting 57 terrorist targets in Syria within the past 24 hours.

Ministry spokesman Gen. Maj. Igor Konashenkov told journalists at Hmaimim Airport in Lattakia province that the Russian airstrikes were limited to Lattakia and Deir Ezzor provinces because the operation command has refrained from targeting terrorist positions in other provinces out of concern for civilians’ lives due to the unsuitable weather conditions in the area.

As for Lattakia province, Konashenkov said that the Russian Aerospace Forces carried out four airstrikes, and that terrorists are retreating thanks to the operations conducted by the Syrian Arab Army in the province’s northern countryside.

He also asserted that the Russian Defense Ministry will continue its humanitarian operation in Syria, and that it’s gearing up to send a new batch of relief to Deir Ezzor city which is besieged by ISIS, adding that 50 tons of relief supplies were airdropped by an aircraft belonging to the Syrian Air Force on January 15th.