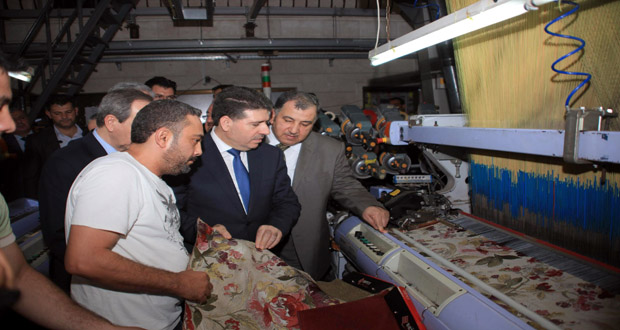 Acting upon the directives of President Bashar al-Assad, the Premier inspected the course of the military operations carried out by the army unit against terrorists’ positions.

Later, the Prime Minister visited Aleppo Military Hospital to check up on injured Syrian Arab Army personnel who had participated on Thursday night in repelling terrorist attacks at the outskirts of Aleppo city.

Al-Halaqi stressed that the victories achieved on Thursday night by Syrian Arab Army in Aleppo laid the groundwork for further victories and show the significant fighting spirit of the soldiers who sent the attacking terrorists fleeing.

The Premier hailed the sacrifices made by the injured army personnel and their determination to achieve victory.

For their part, the injured army personnel expressed satisfaction over their participation in the victories achieved in Aleppo, adding that they will return to battlefront as they recover.

Al-Halqi, who has been on a visit to the province heading a ministerial delegation, also visited the Industrial City of al-Sheikh Najjar where he inspected the scale of destruction, robbery and loot which the City suffered from at the hands of the terrorist organizations.

He used the opportunity to listen to suggestions put forth by some of the industrialists working at the City for activating the production process there and encouraging the reopening of factories and facilities.

Speaking to the reporters following the tour, the Premier stressed that “achieving industrial security and restoring radiance to the “Made in Syria” motto are among the most pivotal strategic goals for the government.”

Al-Halqi also paid visits to al-Nour and Namaa charity associations, hailing the spirit of fraternity and cooperation among the people of Aleppo in light of the terrorist attacks targeting them.

He also met with representatives of various social, religious, economic and cultural parties and MPs from Aleppo and stressed to them that a number of decisions and recommendations have been taken to support the economic movement in the province.

Al-Halaqi was briefed on the ongoing exams process during a visit he paid to colleges and institutes at Aleppo University.

He took part in a Ramadan Iftar (break-fasting) banquet held for orphaned children by Aleppo Governorate on Thursday evening.