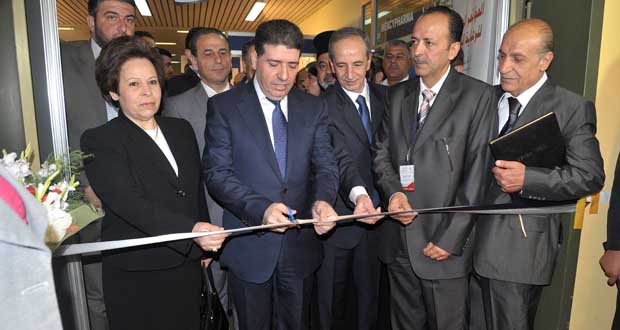 Damascus, SANA – Activities of the Medical Care Scientific Conference and the Syrian Medicare 2015 exhibition kicked off at al- Assad University Hospital in Damascus on Monday.

Doctors and specialists from the public and private sectors are taking part in the conference, which is organized by United for International Exhibitions and Conferences and sponsored by the Syrian government. Around 24 local medical companies representing 81 foreign companies from 16 countries are exhibiting their products in the 4-day Syrian Medicare exhibition, which had stopped for four years due to the current crisis, and was resumed this year.

During the opening of the conference, Prime Minister Wael al-Halaqi lauded the role of Syrian doctors during the current stage in doing their humane duty towards Syrian civilians and military personnel, stressing the important role of medical conferences in introducing new medical innovations and exchanging knowledge. The Premier pointed out that the Medicare exhibition presents an opportunity for showcasing recent innovations in the field of medical technologies and pharmaceutical industries, in addition to providing an avenue for scientific and technical communication between Syria and the rest of the world.

He noted that despite all the damage caused to it by terrorism and vandalism, the health sector in Syria is still providing citizens with free therapeutic and protective services, with constant efforts being exerted to rehabilitate damaged hospitals and health centers and put them back the service, in addition to opening new hospitals in the safe areas.

Al-Halaqi added that health sector continues to provide medicine, particularly for chronic diseases, free of charge, and it still provides hospitals with the latest medical equipment.

For his part, head of the Syrian Doctors Syndicate Abdelqader Hassan affirmed that the scientific conference constitutes a message for people in Syria and the rest of the world that Syria’s doctors are standing fast despite terrorism and the war which Syria is experiencing. In a statement to journalists, Health Minister Nizar Yazigi said that the sanctions imposed on Syria by the European Union and the U.S. had a significant negative impact on the procurement of essential medical equipment and supplies, which is why Syria has turned to the East and friendly countries like Iran and the BRICS states to procure medical equipment and supplies.

Yazigi said that the Ministry’s is adopting a permanent strategy in terms of ensuring the availability of medicine that is based on relying on local pharmaceutical companies and on the assistance provided by some international organizations, particularly the World Health Organization (WHO).

Damascus, SANA- Foreign and Expatriates Ministry affirmed that attempts of terrorist groups to fabricate a …