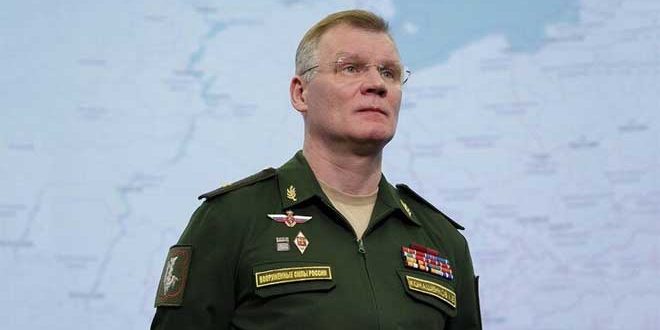 Moscow, SANA- Russian forces completely cleared the city of Mariupol that was controlled by the Ukrainian forces and the extremist groups affiliated with them, besieging the rest of them inside the plant of Azovstal, and shooting down a Ukrainian plane loaded with Western weapons near Odesa.

“Mariupol was completely liberated by Russian forces from the Azov Nazi Battalion, the Ukrainian forces and the foreign mercenaries, and what remained of them are still surrounded in the plant of Azovstal Iron and Steel Works, with them don’t have any chance to stay alive but to surrender,” Spokesperson of the Russian Defense Ministry, Major General, Igor Konashenkov, said in a press briefing Saturday evening.

Konashenkov clarified that the Ukrainian forces suffered heavy losses reaching at 23.367 fighters, among them more than 4,000 in the city of Mariupol, noting that 1.464 Ukrainian military personnel surrendered to the Russian forces.

He went on to say that upon besieging Mariupol on March 11th, the number of the Ukrainian forces was 8.100, while the besieged elements now in Azovstal plant are nearly 2.500 including soldiers, Nazis, foreign mercenaries, adding that most of them want to lay down their weapons and surrender.

The Russian spokesperson refuted the statements made by the Ukrainian President, Volodymyr Zelenskyy, who said that the loses amounted to only 3.000 dead with 10.000 wounded, saying “The Russian Defense Ministry has trusted information on the real loses of the Ukrainian forces and National Guard, along with the foreign mercenaries whom Zelenskyy fear to reveal to the Ukrainian people.

The Major General announced that the Russian Air Defenses shot down a Ukrainian military cargo plane loaded with weapons sent by Western state to Ukraine, near Odesa.

Russia has repeatedly warned against sending any weapons to Ukraine which will be military targets in front of its forces.