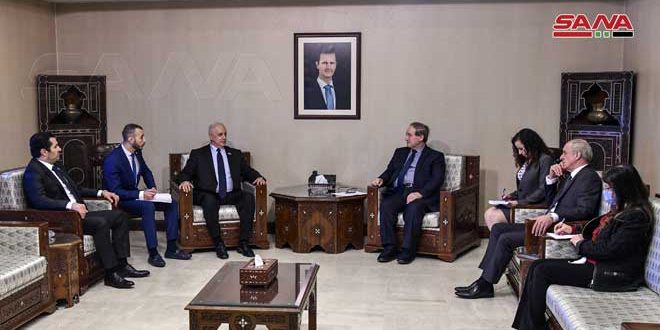 Damascus, SANA- Foreign and Expatriates Minister, Dr. Fayssal Mikdad discussed on Sunday with Fernando Agustin Parisi Moreno, the Paraguayan Ambassador in Beirut and the Chargé d Affairs of his country’s Embassy in Damascus, ways to strengthen and develop bilateral relations between the two countries in all fields.

During the meeting, Mikdad stressed Syria’s keenness to develop bilateral relations with Paraguay and Latin American countries in all fields. He pointing out to the challenges and threats that Syria faced in recent years, including terrorism, the illegal US and Turkish presence on part of the Syrian lands, and attacks by the Israeli occupation.

Minister Mikdad touched on the economic disasters caused by the unilateral economic measures imposed by the US and the European Union on the Syrian people, especially on children, women and the neediest groups.

For his part, Vicioso expressed the aspirations and desire of the Paraguayan people and leadership to enhance bilateral relations with Syria and push them forward at all political and economic levels.

He said that he observed during his visit a stability of the situation in Syria and signs of triumph over terrorism.