Moscow, SANA – Russian Ministry of Foreign Affairs said that the idea to reach a settlement to the crisis in Syria according to the “from the smallest to the biggest” principle, through the so-called “local freezing” of fighting is still the main topic in the activities of the UN envoy to Syria, Staffan de Mistura.

In a statement on Monday, the Ministry said Moscow strongly supports these initiatives, which basically focus on settling the situation in Aleppo city, the biggest in north Syria.

On the news about a truce in al-Waer area in Homs province, the Ministry said that both the Syrian authorities and a number of leaders of the illegitimate armed groups hope to use “cease –fire” to negotiate about a permanent reconciliation in the area, adding that the Syrian government hopes “the local extremists” would hand over their weapons and return to civil life.

Russian Foreign Ministry added that national reconciliation processes are carried out successfully in Eastern al-Ghouta, highlighting that the Syrian authorities managed to exit more than 2.000 citizens from fighting zones in this area and settled the files of more than 450 gunmen who decided to turn themselves in to the authorities.

According to the statement, the accumulated experience, as a result of reconciliations led by the Syrian government, is very useful that can be used to solve difficult situations in a number of areas, including Aleppo. 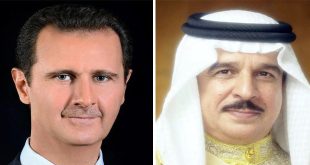