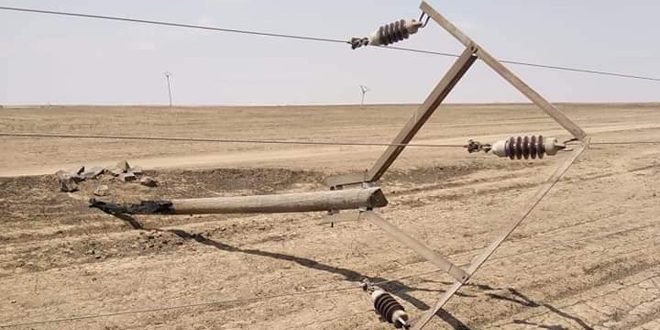 Hasaka, SANA- Turkish occupation forces and their mercenaries of terrorist organizations continued to loot the public properties and peoples’ properties in the occupied villages of Ras al-Ayn in Hasaka northwestern countryside.

Civil sources told SANA reporter that terrorists of the so-called “ The North Storm” organization dismantled and stole the utility poles and towers in Umm `Ashba village in Ras al-Ayn countryside ,and transported them to headquarters and warehouses that they set up for this purpose to be smuggled outside the country ,in cooperation with brokers and Turkish merchants.

The systematically theft and looting of property and public facilities carried out by terrorists in the areas they occupy are covered up and supported by the authorities of the Turkish regime, as a part of Erdogan regime’s schemes to loot the wealth and capabilities of the Syrian state.