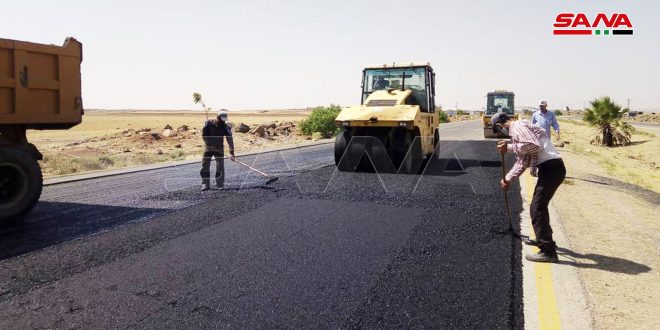 Daraa, SANA- The General Company for Roads and Bridges, the Southern Region Branch, has completed 70 percent of the maintenance project for the eastern lane of Daraa-Damascus highway.

Director of the branch, Eng. Afif al-Zoubi, said in a statement to SANA reporter that the project owner is the General Establishment for Road Transport, and the works include scraping, asphalt pavement, safety barriers, and the installation of road signs in different locations, with a total value of SYP 400 million, and an implementation period of 250 days.

Al-Zoubi noted that the work started from Nassib border crossing towards the north through the vehicles and cadres of the General Company for Roads and Bridges, stressing that the highway is considered a main road for Daraa province towards Damascus and it witnesses heavy traffic.