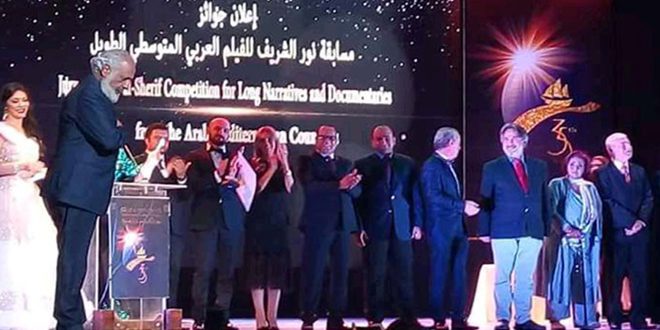 Syria’s participation in the festival was limited to ilms produced by the General Organization for Cinema.

The awards are Mahmoud Abdul-Aziz Award for the Best Actor which was won by elite Syrian artist Ayman Zidan, Nour al-Sharif Award for the Long Narratives and Documentaries and the Best Scenario Award which was named after the late author Najib Mahfouz at the International Competition.

Meanwhile, Syrian film al-Etiraf “Confession” by director Bassel al-Khatib won the Best Scenario Award within the Arab Competition for the Long Narratives, and the Best Actor Award went for artist Dima Qandalift for her role in the film.

Hasaka, SANA- Citizens of Amouda city in the northern countryside of Hasaka demonstrated in condemnation …