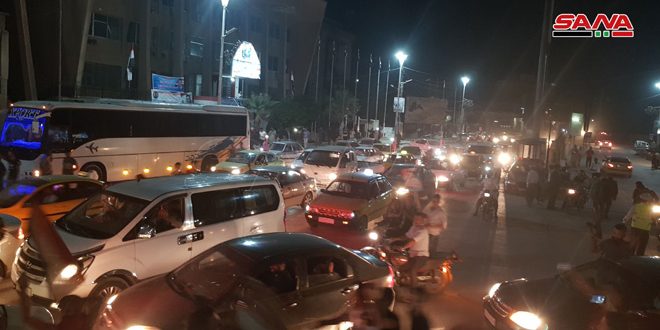 Upon the announcement of this news, the people of Hasaka began celebrating through holding marches in the neighborhoods of the city, welcoming this move to confront the Turkish aggression.

Meanwhile, in Qamishli, the locals took to the streets in expression of their happiness and welcome of the declaration of the move of the Syrian Arab Army to confront the Turkish offensive, affirming that the army is the only protector of the homeland which is able to defend it in the face of the aggression.

This movement comes to confront the ongoing Turkish aggression on towns and areas in the north of Hasaka and Raqqa provinces, where the Turkish forces committed massacres against locals, occupied some areas, and destroyed infrastructure.

In the same context, Sheikh of al-Bakkara Tribe Nouri Khaled al-Talla’a, Sheikh Said al-Fahid of al-Sharabin Tribes and Sheikh of al-Mahasen Tribe in al-Shadadi Rafi’a al-Hamdyia and members of al-Jabbour Tribe called for supporting and standing by the Syrian army in the face of the Turkish aggression against the Syrian territories.

They affirmed that the Syrian Arab Army is the guarantor of the homeland’s security, expressing condemnation of the offensive launched by the Turkish regime.

Hasaka, SANA- Gunmen affiliated to US occupation-backed QSD militia ran over two citizens by their …