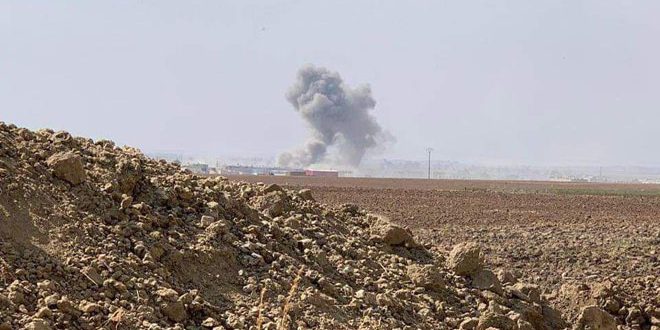 Hasaka, SANA- For the 3rd day in a row, the forces of the Turkish regime continued their aggression on the Syrian territories, targeting with  artillery and warplanes  a number of areas in Hasaka countryside.

The Turkish occupation forces launching an intensive shelling on Ras al-Ayn city, in the northwestern countryside of Hasaka province  in an attempt to completely occupy it after occupying the villages of Tal Halaf and Um al-Khair and penetrating into Allouk and Kashto in its surroundings and a number of the city’s neighborhoods last night.

SANA reporter said that the forces of the Turkish regime targeted the residential neighborhoods in the city of Ras al-Ayn with air and artillery intensive shelling, launching concentrated shelling against the citizens’ houses and service facilities and establishments, and causing huge material damage.

The reporter added that the forces of the Turkish regime clashed with Qasad (SDF) militias with light and medium weapons and there are information on that Qasad has brought reinforcement to Ras al-Ayn city which were able to stop the Turkish regime’s forces incursion and regain control over parts of the industrial region inside the city. 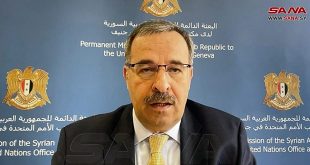 Geneva, SANA-Syria called for the immediate and unconditional removal of the unilateral economic coercive measures …