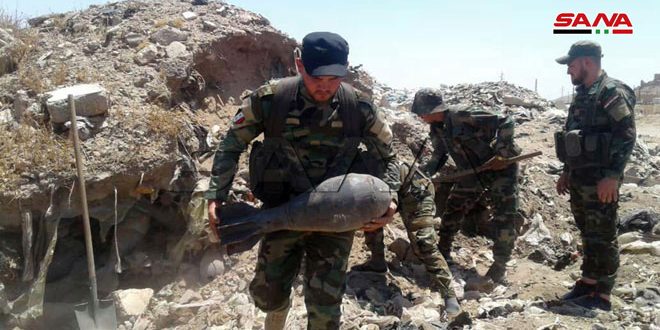 The authorities told SANA reporter that during combing operations in areas which have been liberated by the Syrian Arab Army, an underground cache containing large amounts of mortar shells covered with layers of plastic from Daesh terrorists’ remnants was discovered in al-Mayadeen’s Badiya “desert” in Deir Ezzor eastern countryside near Qalet al-Rahba area.

al-Mayadeen area in Deir Ezzor cache mortar shells 2019-07-24
admin
Share
Previous 1216 service projects executed in Aleppo and its countryside since its liberation from terrorism
Next Syria and Russia: Solution to crisis in Syria will be through eliminating terrorism and return of the displaced