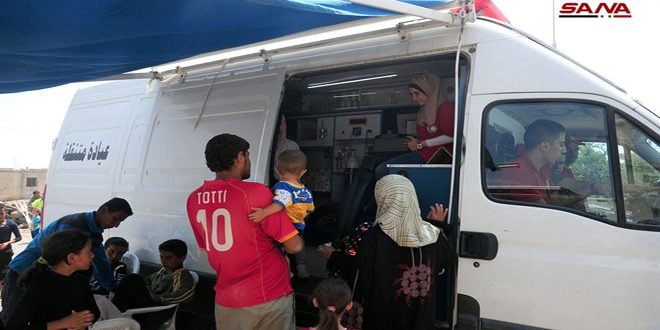 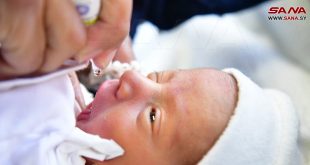 Daraa, SANA- In framework of providing the needs of citizens in the areas to which the Syrian Arab Army restored security and stability, the Relief Subcommittee in Daraa province sent flour and drinking water to a number of towns in al-Yarmouk Basin in the western countryside.

SANA reporter in Daraa said that in framework of supporting the locals till ending the works of restoring and fixing water networks and the bread facilities, the Relief Subcommittee sent 1,000 bags of flour to the towns of al-Shajara, Abdin, Ma’aryia, Koyia and Beit Arah, in addition to sending 4 tanks of drinking water.

Meanwhile, teams of the Syrian Arab Red Crescent (SARC)/ Daraa Branch headed for Daraa accompanied by three mobile clinics with specialist doctors and nursing cadre to provide health services for patients in the towns of Ma’aryia and Koyia.

Two ambulances were also sent to transport the cases which need a treatment at the public hospitals in Daraa.

The reporter indicated that SARC teams distributed an amount of medicines for the chronic diseases and children medicines among the locals who had lived in harsh circumstances when the area was controlled by terrorists.

Member of SARC/ Daraa Branch Dr. Khaled al-Omari noted that SARC teams are providing all types of medical services for the locals.

A number of the locals in the town of Ma’aryia expressed hope that SARC medical teams will continue to provide care for them till rehabilitating health centers which had been destroyed at the hands of terrorists.