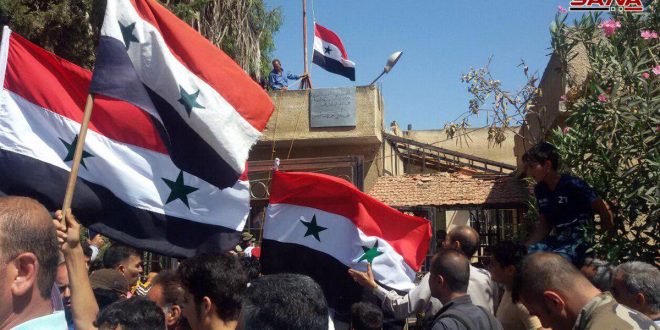 Daraa, SANA- Army units on Thursday entered Tafas city in Daraa western countryside amid a warm welcome by the locals after the city joined the reconciliation and militants handed over their arms.

SANA reporter said that the flag of the Syrian Arab Republic was hoisted over the building of Tafas City Council, 13 km to the northwest of Daraa city, after Tafas joined the reconciliation and army units were deployed in it.

The reporter added that large crowds of the city’s locals received army personnel and they participated in hoisting the national flag in the city to declare that it became secure and stable after the surrender of the armed groups who handed their arms over under the pressure of the military operation carried out by the army to end the existence of terrorists in Daraa province.

In a press statement from inside Tafas city, Daraa Governor Mohammad Khaled al-Hannous said that more than 80 percent of the total area of Daraa was freed from terrorism, either through reconciliations or the military operation conducted by the Syrian Arab army against terrorists.