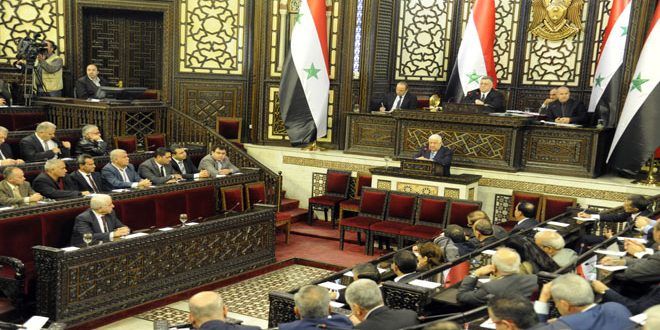 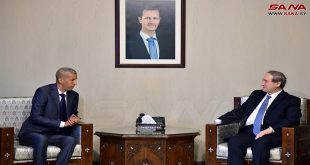 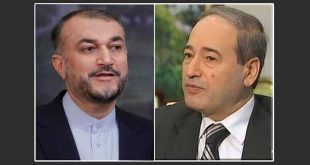 Damascus, SANA – The People’s Assembly held a session on Tuesday headed by Speaker Hammoudeh Sabbagh, during which Deputy Prime Minister, Foreign and Expatriates Minister Walid al-Moallem delivered a briefing on the latest Arab and international arenas.

Al-Moallem said that whole some would say that victory has been achieved after eliminating Daesh (ISIS), the fact is there is are still international conspiracies against Syria, although the number of states taking part in them has decreased, adding that the remaining terrorists are becoming more ferocious, 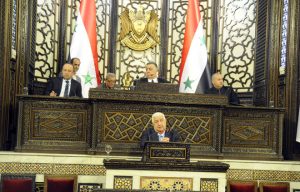 He said that the US is continuing its support for terrorists in Syria in order to prolong the crisis, which is what the Israeli occupation wants, but this US support cannot undermine the victories achieved by the Syrian Arab Army against Daesh.

Regarding de-escalation zones, al-Moallem said that the duration for these zones is six months that can be extended, but terrorists continue to breach the agreement from time to time, adding that it’s unacceptable to keep the situation as it is in these areas as the goal is to clear the entirety of Syria from terrorists. 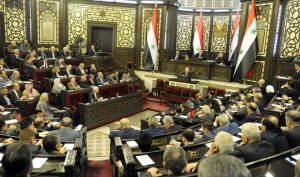 The Minister said that there are some groups north of Syria that constitute a Trojan horse for US aggression, stressing the need for US and Turkish forces to leave Syria.

Regarding Geneva 8, al-Moallem said that the conference was preceded by the “Riyadh 2” statement that was meant to be an obstacle for the conference and caused it to fail in producing any progress, adding that the Syrian Arab Republic delegation will head to Astana to participate in the next round of meetings, and that work is ongoing to prepare for the Sochi conference.

Responding to queries by the Assembly members, al-Moallem said that Syrian sovereignty is sacred and cannot be relinquished under any circumstances, and the same goes for the Syria’s territorial integrity and the unity of its people.

He also praised the role of Syria’s friends and allies, mainly Russia, Iran, and the resistance. 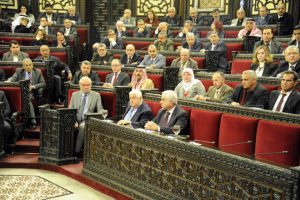 Regarding Syrian expatriates, the Minister said that Syria cares for all of them and is working to maintain contact with them, stressing their important role in contributing to reconstruction.

Al-Moallem reiterated that the priority in Syria is eliminating terrorism and preserving the unity of Syria, adding that Palestine is still the focus of Syrian foreign policy and that the US decision on Al-Quds (Jerusalem) violates Security Council resolutions and international legitimacy.

He stressed that the US-led war on Syria isn’t over, and Turkey is carrying out a serious aggression against Syria as it wants to seize parts of Syrian territory, while Europe continues to impose unjustified sanctions on Syria at the same time as it sheds crocodile tears for the children in Syria.