A prayer for peace and security in Syria held at St. George Cathedral in Damascus 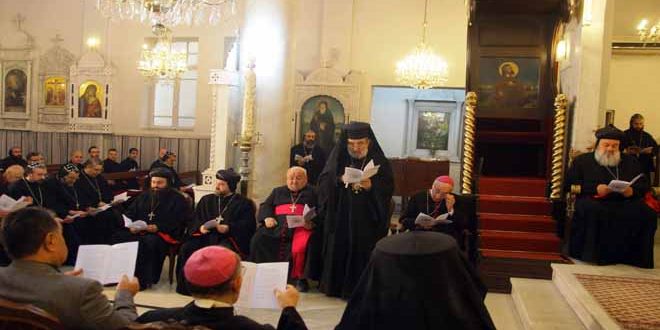 Damascus, SANA- The Syriac Orthodox Patriarch of Antioch and All East Mar Ignatius Aphram II headed a joint prayer at St. George Cathedral in Bab Touma neighborhood in Damascus on Tuesday on the occasion of Christmas.

The prayer, which included all Christian denominations, was held for the intention of restoring security and peace in Syria and supporting the Church of al-Quds (Jerusalem) city. 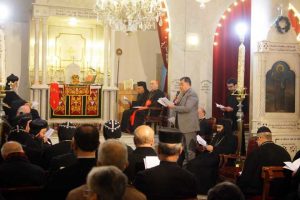 Patriarch of the Melkite Greek Catholic Church Joseph Absi participated in the prayer along with a number of heads and representatives of Christian denominations in Damascus and the Ambassador of the Vatican in Damascus Cardinal Mario Zenari.

Father Jack Jacob delivered a speech in which he affirmed the noble meanings of the glorious birth of the messenger of love and peace, and called on all honorable people in the world to work to end the terrorist war against Syria, praying to God to preserve Syria and for the release of all abducted persons, including the kidnapped bishops John Ibrahim and Peter Yazigi.

In a statement read on behalf of the heads of the Christian denominations in Damascus on what is happening in Palestine, Patriarch Aphram II said the US President’s decision over al-Quds is unjust and contrary to UN resolutions.