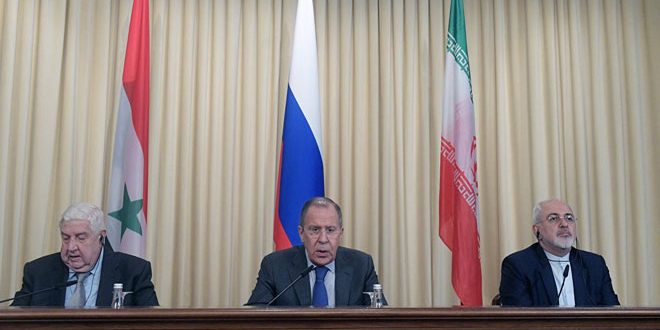 Moscow, SANA – Foreign Ministers of Syria Russia and Iran stressed that the US aggression against Syria constitutes a flagrant violation of principles of the international law and the UN Charter, calling for an independent and transparent investigation on the alleged chemical attack in Khan Sheikhoun in the countryside of Idleb province.

In a joint press conference following the tripartite meeting held in Moscow, Deputy Prime Minister, Foreign and Expatriates Minister Walid al-Moallem thanked his Russian counterpart, Sergei Lavrov for his invitation to visit Moscow after the US aggression against Syria, extending gratitude to the Iranian Foreign Minister Mohammad Javad Zarif for attending the meeting which conveys a firm message after the attack.

Al-Moallem said that yesterday’s bilateral meeting with Minister Lavrov dealt with several issues related to further intensify efforts to combat terrorism and the support could be provided by Russia in different domains, adding that his meeting with Minister Zarif tackled the same topics with al-Moallem expressing the Syrian people, government and leadership’s gratitude to Russia and Iran for their support.

He reiterated that Syria will continue its efforts to cleanse all Syrian territories of terrorism.

For his part, Lavrov said that the meeting enabled us to better coordinate our attitudes towards the latest developments regarding the settlement of crisis in Syria, adding that the three sides discussed the situation after the US missile attack on an airport in Syria on April 7th and agreed on that this attack is an aggression and a blatant violation of the International legitimacy.

The Russian Foreign Minister said that we insist on that the US and its allies should respect Syria’s independence and that they should not do things that pose threat to the regional and international security and the main principles of international legitimacy.

Lavrov reiterated calls for conducting an honest and unbiased investigation sponsored by the Organization for Prohibition of Chemical Weapons (OPCW), welcoming the Syrian government’s readiness to receive an OPCW mission for this purpose.

He added that the three sides discussed the need to not ignite the situation in Syria and that such attempts which aim at disabling the settlement process should not succeed, adding “We stress that the crisis in Syria should be settled through a comprehensive diplomatic dialogue with the participation of representatives of all parties according to the UNSC resolutions, including resolution No.  2254 which provides for that the Syrian people alone shall determine their future.

Lavrov underlined the importance of Astana meeting which paved the way for Geneva process, noting that preparations are underway to launch new talks in May, in addition to a meeting that will bring together representatives from Turkey, Iran and Russia in Tehran where Russia will voice full support to the rehabilitation of infrastructure and solve the urgent humanitarian problems of Syrian people.

“We have paid special attention to intensifying efforts to eliminate terrorism in Syria and unifying those exerted by the international community to establish an anti-terrorism front,” said Lavrov, expressing satisfaction over the talks’ outcomes which stress the need to continue dialogue.

In turn, the Iranian Foreign Minister said that the unilateral acts by some parties are unacceptable since they violate the independence and sovereignty of independent states, adding that his country will cooperate with different sides to prevent the use of chemical weapons.

He stressed the importance of finding out who used the chemical weapons in Syria through a deliberate and independent investigation.

Regarding the political situation, Zarif noted that intensified efforts are required to put an end to the war waged on Syria for more than six years depriving the Syrian people from determining their future and the future of their country.

He affirmed that Iran will cooperate with Russia and hope that Turkey would cooperate too in order to go ahead with the political process in Syria and enhance the cessation of hostilities to solve the crisis in the country.

In response to journalists’ questions, Minister al-Moallem said that the Syrian Arab Republic has repeatedly declared that it does not have chemical weapons and this was approved by the Organization for the Prohibition of Chemical Weapons (OPCW) in 2014, adding that what happened in Khan Sheikhoun is a fabricated operation and that Syrian aviation did not hit any target in it with chemical weapons.

Al-Moallem said that is why we demand forming an impartial and professional international commission of inquiry to visit Khan Sheikhoun and al-Shairat Airport, adding that the Syrian government will facilitate all what will lead to the success of the work of this commission to provide an objective report.

“Why the US, assisted by a crowd of Western puppets, is afraid of the formation of this commission?” he inquired, saying that if the US strike is baseless and unjustified then it is a described aggression on the Syrian sovereignty and that is the real question to the public opinion.

“The US will not accept an impartial investigation in the incidents of Khan Sheikhoun or al-Shairat Airport. They claimed that the aircraft that bombed Khan Sheikhoun took off from al-Shairat Airport and they bombed this airport and no chemical weapons had been appeared. I say they will not accept. The General Secretariat of the OPCW has a mission operating in Turkey and they are collecting samples from Turkey and I confirm to you that Syria will not accept such an investigation because it serves US aggression,” he clarified.

Anawering a question if the ministers discussed media reports that talked about the formation of a new front in the south against the Syrian Arab Army by Britain, America, the Zionist entity and the Saudi and Jordanian regimes, al-Moallem said that this subject is heavily circulated in the media and also there are some reports taking about crowds and that the United States transferred military equipment to the southern border with Jordan. “We discussed this issue and I confirm that we have joint actions to repel any aggression to be launched on the Syrian territory,” he said.

Answering a question about the US’ rejection to support the proposals of Russia and Iran on the establishment of an international commission of inquiry to investigate the use of chemical weapons in Idleb with the participation of experts from the OPCW and the UN, Lavrov said that “the attempts to block the proposals by Russia and Iran to establish an independent commission for an unbiased and objective investigation suggest only that those who are taking such attempts have unclean conscience.”

“The US counterparts in recent days have been saying for some reason Russia is a guarantor of Syria’s chemical disarmament, as if the United States has no bearing on that at all,” he said.

“It should be remembered that in response to Syria’s readiness to join the Chemical Weapons Convention and to dispose of all of its chemical weapons stockpiles Russia and the United States came out with an initiative to arrange for that process,” Lavrov said.

He added that “within record-tight deadlines the parameters of that procedure were agreed on and a little more than one year later the OPCW said in its report that the whole declared amount of chemical weapons had been eliminated.”

“This is a hard fact. It was stated in bold print in the OPCW report that was presented to the United Nations,” he said.

In turn, Zarif welcomed Syria’s call for international experts to carry out the investigation to reveal the truth.

Earlier, Minister al-Moallem discussed with Iranian Foreign Minister Mohammad Javad Zarif the continued coordination and cooperation between Syria and Iran in the face of terrorism.

During their meeting, the two sides also discussed the mechanisms of the continued coordination and cooperation in the face of terrorism, conspiracies and attacks against the Syrian Arab Republic.