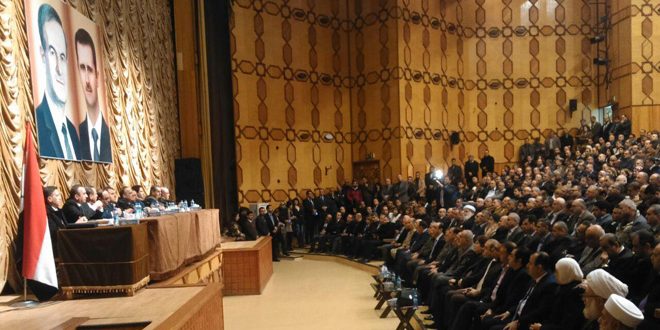 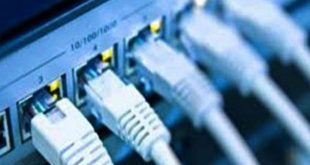 Internet service in Lattakia city goes down due to malfunction 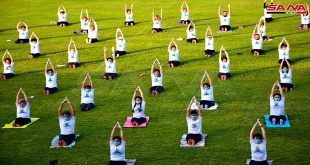 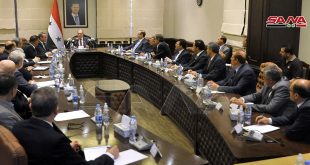 Lattakia, SANA–Prime Minister Imad Khamis said the government will be focusing in the next stage on developing the production and development process by utilizing available resources to the max.

Khamis’ comments came during his meeting on Friday with economic and social figures in Dar al-Assad for Culture in Lattakia.

Khamis announced that the government has moved to field work acting on President Bashar al-Assad’s directives, indicating that this meeting will be followed by a string of similar meetings in other provinces.

Commenting on the situation on the ground, Khamis said that the Syrian people are making one victory after another in the war against terrorism. “When the enemies of Syria realized that their plans are doomed, they turned to destroying the Syrian state’s infrastructure and economic resources to fight the Syrian people in their livelihood,” he added.

The Premier unveiled a “developmental vision” the government has that covers agricultural, industrial and investment sectors, paralleled with an integrated legislative structure and facilitations for investors. This vision, the Premier said, “sits well with present conditions and available potential amid huge impacts of the terrorist war on the economic and living conditions in Syria,” indicating that the national economy is expected to be “a war economy” managed wisely by the government.

Khamis said the Syrian government will allocate no less than SYP 2 billion to subsidize small and micro-sized enterprises to enhance rural development.

He added that the Syrian government is seeking to improve the service sectors in the province, citing the inauguration of new projects in various fields for that end, and pledging further support for martyrs’ families and injured army personnel.

Khamis vowed that services in Lattakia province will see tangible improvement, unveiling that a work team presided over by Tourism Minister had been formed, with several tourism and development projects prepared in the province.

The participants focused in their queries on a number of demands to improve services in the province, calling for exerting more efforts concerning the abductees’ file.

Premier Khamis conveyed to the army personnel President Bashar al-Assad’s greetings and appreciation for their sacrifices.

He said that the Syrian government’s team “draw strength and will from the heroes of the Syrian army to complement their achievements and victories against terrorism,” citing the Syrian army’s recent victories in Aleppo.

In the same context, Khamis visited injured army personnel in Marty Zahi Azraq Hospital and Lattakia, where the hospital’s director briefed him on the services provided to the injured.

The Premier relayed to the injured the salutations of President al-Assad, and listened to their stories about how they were injured.

Khamis was accompanied during these visits by the Ministers of Interior, Local Administration and Environment, Health, Higher Education, Internal Trade and Consumer Protection, and Water Resources.

Prime Minister Imad Khamis stressed that the ferocious war waged on Syria for more than 5 years aimed at destroying the state’s economic capabilities and infrastructure, adding that the Syrian people and army have showed great bravery against terrorism and foiled all foreign schemes.

Meeting economic and industrial figures, businessmen and representatives of chambers of commerce, industry and tourism in Lattakia, Premier Khamis noted that President Bashar al-Assad has led this battle in a transparent manner and won a remarkable victory, highly appreciating the sacrifices made by the Syrian army in combating terrorist organizations. He underlined the economic sectors’ key contribution to the steadfastness of the Syrian state, adding that over the past three months, several meeting have been held with different economic activities in Damascus to know their problems and look for solutions and we are here today in Lattakia to reach good outcomes that support the national economy.

Khamis highlighted the government’s unremitting efforts to set up a work mechanism to face economic challenges and take incentive steps to support industry, agriculture, trade and investment sectors through providing facilitations to the owners of terror-affected factories and forming sub-committees to estimate the damage caused to industrial facilities.

The premier stressed the need to a comprehensive national plan with extraordinary steps to enhance the government’s steadfastness and support new investments such as offering land for free and tax and duty free importation of raw materials, in addition to adopting effective strategies to combat smuggling.

Regarding the electricity issue, Khamis said that the government will take new steps to ensure the efficiency of power generation plants and improve the situation within the next six months.

The government has made progress towards improving the economic situation and rehabilitating the damaged infrastructure to relaunch the production process, adding that new legislations are under discussion to enhance trade exchange and combat administrative corruption, he added.

The premier listened to the attendees’ complaints, problems and demands to support rural areas through the establishment of services and investment projects and the development of infrastructure, in addition to reducing customs duty on imported goods and raw materials to enhance national industry, promoting partnerships between public and private sectors and granting loans to support small and medium-sized enterprises. In turn, Tourism Minister Bishr Yazigi said a special groups will be formed to develop rural areas in Lattakia, noting that the Ministry, in cooperation with Ministry of Agriculture and Agrarian Reform and other ministries concerned, has set a new vision to make investments along the Syrian Coast and establish tourist villages.

Interior Minister Mohammad al-Sha’ar said that the security situation is appropriate to re-run the economy wheel, adding that the ministry has done its best to overcome the obstacles hindering production.

Minister of Agriculture and Agrarian Reform Ahmad al-Qadri noted that the ministry is working hard to resolve problems of permissions to import goods and provide necessary facilitations to the greenhouses owners, in addition establishing a research center specialized in greenhouse plants in Tartous and another one specialized in citrus in Lattakia. For his part, Local Administration and Environment Minister Hussein Makhlouf underlined serious efforts to establish developmental, agricultural and tourism projects, adding that the ministry has granted permissions to facilitate investments.

Hasaka, SANA- The US occupation-backed Qasad groups on Sunday morning controlled the telecommunication center in …