Syria participates in the IPU meetings in Geneva 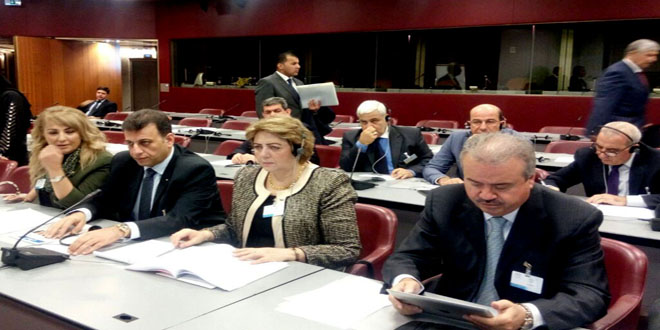 Geneva, SANA – A Syrian delegation is participating in the meetings of the 135th session of the Inter-Parliamentary Union (IPU) in the Swiss city of Geneva, headed by Speaker of People’s Assembly Hadiyeh Abbas.

At the consultation meeting of the Islamic Group at the IPU, held on the sidelines of the session, Abbas called for supporting the emergency item submitted by the Syrian People’s Assembly on the negative repercussions of the unfair economic sanctions imposed on the Syrian people, stressing that these sanctions are used by some countries to exert pressure on Syria and directly affect the basic human rights.

The participants in the meeting discussed the issues on the IPU agenda and the emergency items listed for voting, stressing the need to adopt a unified stand by the Islamic Group on the issues of common concern. In the same context, Ashwaq Abass, member of the People’s Assembly, participated in the Forum of Women Parliamentarians that discusses the role of women in parliaments and means to enhance women’s political participation.

The IPU meetings will discuss over five days a number of issues mainly the role of parliaments in the immediate response to human rights violations, freedom of women and their participation in the political process, the reports of the committees on peace, sustainable development, finance, trade and the UN affairs.