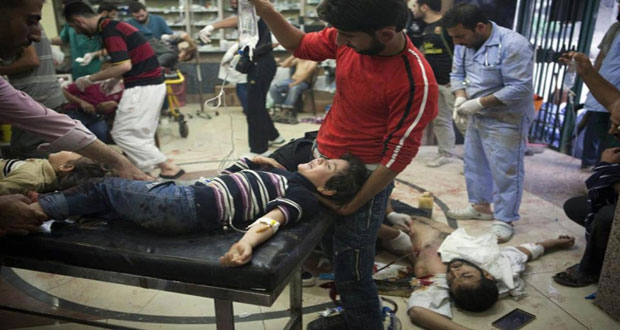 Gaza, SANA – The Israeli occupation continued its brutal aggression against Gaza Strip, killing over 139 Palestinians within 24 hours, and injuring over 350, many of them women and children.

AFP quoted Spokesperson of the Emergency Committee in Gaza Ashraf al-Qudra as saying that 35 Palestinians including five children were killed on Saturday morning in new airstrikes on Rafah to the south of Gaza.

Al-Qudra added that five other Palestinians were killed in an air raid targeted a house in Gaza city.

Ten Palestinians were also killed and many others were injured by a new Israeli raid on Gaza to raise the number of the martyrs since down toady to more than 50.

This brings the total toll rose to around 1800 since the beginning of the Israeli aggression against Gaza on July 8th.

The Israeli warplanes shelled a university building in Gaza.