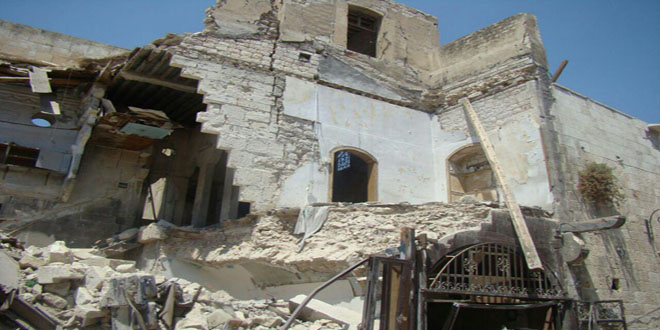 Head of Aleppo Department of the Directorate-General for Antiquities and Museums (DGAM) Eng. Khaled Masri told SANA that Beit Ghazaleh and Dar AjakBash, which are located in the al-Jadida neighborhood adjacent to the old city of Aleppo, sustained damage to the attacks of the terrorist organizations. He pointed out that a team from the Department has recently succeeded to reach the two locations and managed to inspect them, take pictures and document the damage caused to the two houses in several stages.

The inspection showed that significant damage was done to most of the stone walls, ceilings and rooms and other wooden furniture.

Beit Ghazaleh is one the largest and better-preserved palaces from the Ottoman period in Aleppo. It dates back to the seventeenth century and it was restored in 2007-2010 to host the Memory Museum of the city of Aleppo.

While Dar AjakBash dates back to the eighteenth century, and it was turned into Folk Traditions Museum in 1981.