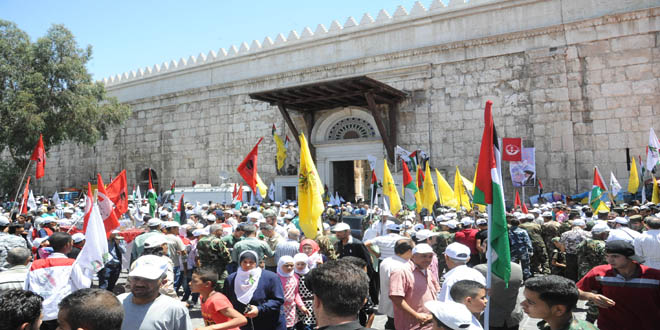 Damascus, SANA-A massive rally was held Friday in Damascus to mark the International Quds (Jerusalem) Day, an annual event held on the last Friday of the holy month of Ramadan.

The rally set off from the entrance of al-Hamidiyeh ancient market towards the Umayyad Mosque in which the participants affirmed the need to unify the powers of the Arab nation for the restoration of Jerusalem and the holy sites.

In a statement issued by the participants, they considered Quds Day as an opportunity to mobilize capabilities to confront the Zionist enemy which can only be confronted by resistance as the only option to end the occupation and recover rights.

Secretary of Damascus branch of al-Baath Arab Socialist Party Dr. Wael al-Imam delivered a speech in which he affirmed that the war on Syria aims at liquidating the Palestinian cause.

In turn, Secretary General of the Popular Front for the Liberation of Palestine – General Command (PFLP-GC) Ahmad Jibril said that the nation’s enemies have pushed forward the conspiracy against Syria in a bid to destroy this brave country which has fought for the sake of restoring all Arab rights in Palestine, stressing that Syria is steadfast in the face of the terrorist war thanks to the courage of its army, leadership and allies.

At the conclusion of the rally, the participants saluted the young men and women of the third Palestinian Intifada, pointing out that those young people are the hope of the future who have proven to the whole world that the Palestinian people will not succumb to occupation, injustice and oppression and will continue their struggle until the liberation of their lands.

The International Quds Day, an annual event held on the last Friday of the holy month of Ramadan. The event was first initiated by the Islamic Republic of Iran in 1979 to express solidarity with the Palestinian people in the face of the Zionist Israeli entity and its control of Jerusalem.