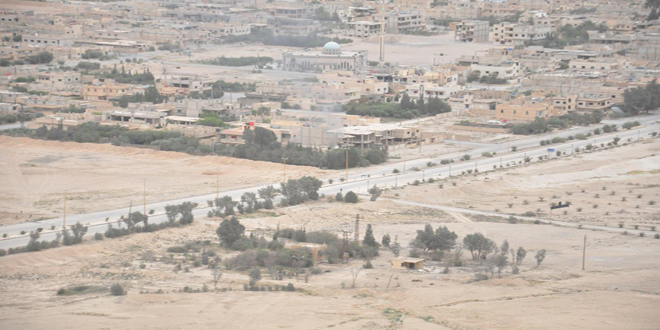 President Putin told President Bashar al-Assad, in a telephone conversation Sunday, that he tasked Russian Defense Ministry to provide a wide possible assistance to the Syrian side in demining Palmyra, noting the importance of preserving this unique historic site for world culture, Kremlin spokesman Dmitry Peskov said, as reported by
Russia Today. President al-Assad received a phone call from President Putin Sunday who congratulated him on retaking Palmyra city from terrorists and affirmed that the Russian army will continue to support Syria against terrorism. Putin also held a phone call with UNESCO head Irina Bokova and told her that representatives of the Russian contingent will participate in the demining of the ancient city. The two agreed that UNESCO, Russia and Syria will soon take necessary steps to evaluate the damage to the historic site and map out a plan of restoring what can still be restored, Peskov added. Earlier Sunday, the General Command of the Army and Armed Forces affirmed in a statement that security and stability were restored to the ancient city of Palmyra following a series of precise and effective military operations that were carried out by the army units with the help of the popular defense groups, being backed by the
Syrian and Russian Air Forces.