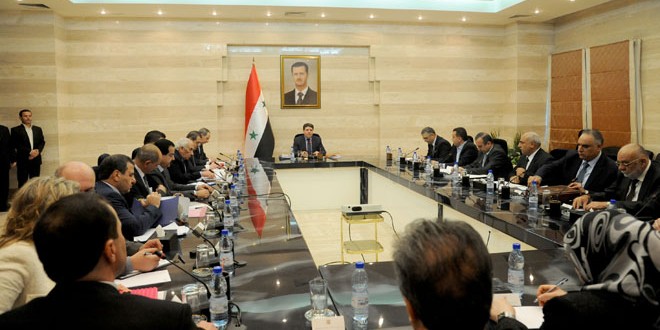 Damascus, SANA-Prime Minister Wael al-Halaqi affirmed on Thursday that enhancing the steadfastness of the Syrian people is a top priority for the government.

During a meeting with a number of governors, al-Halaqi said that the government is doing its best to address the challenges facing it and improve the level of services, stressing on the need to facilitate the procedures for citizens and combat corruption.

He pointed to the subsidy rationalizing project and its role in striking a balance between resources and expenditure as well as adjusting prices.
The Premier noted the enhancement in the spirit of national reconciliations due to the victories achieved by the Syrian Arab Army and restoring control over new areas. Al-Halaqi stressed that the upcoming parliamentary elections are an affirmation of the vitality of the Syrian people and the strength of the Syrian state and its institutions, calling on all government establishments to cooperate to accomplish the electoral process in accordance with the fair and transparency constitutional requirements that will contribute to the success of the political process in Syria.

For their part, Deputy Commander-in-Chief of the Army and Armed Forces, Defense Minister Fahd Jassem al-Freij, Deputy Prime Minister for Services Affairs, Local Administration Minister Omar Ghalawanji, State Minister for National Reconciliation Affairs Ali Haidar and the governors gave a review about the reality of services and developmental sectors and the exerted efforts to enhance security in the provinces in addition to offering better services to citizens in all areas.