Moscow: Russian pilots have no goal except to help those fighting terrorists in Syria 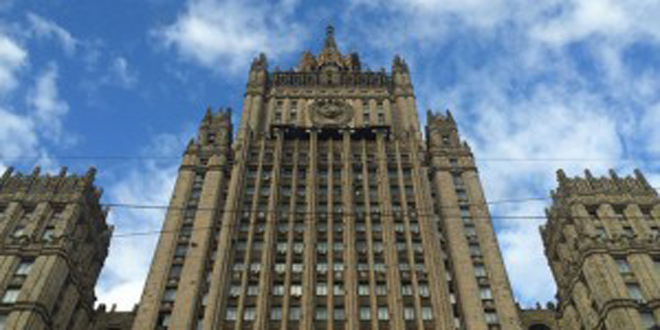 Moscow, SANA- Russian Foreign Ministry spokeswoman Maria Zakharova said on Tuesday that the main goal of the Russian airstrikes in Syria is supporting the Syrian forces and others who are fighting ISIS, Jabhat al-Nusra, and other terrorist organizations.

In a press statement on Tuesday, Zakharova said that Russia’s goal in Syria is to fight terrorism, adding that the Russian pilots have no goal but to support the Syrian army, popular protection units, and fighters of the moderate nationalist opposition against ISIS, Jabhat al-Nusra, and other terrorist organizations.

Zakharova denied accusations against Russia which claimed that the Russian aircrafts target positions that are not for terrorists, emphasizing that the Russian strikes adhere to what had been agreed upon at the meeting of the International Syria Support Group (ISSG) in Munich.

Zakharova added that it is strange to hear about countries that bomb hospitals in Afghanistan and supply a party with cluster bombs to hit civilian sites in Yemen saying they care about people’s lives, in a clear reference to the United States.

Regarding towns north of Syria, Zakharova explained that some international parties appealed to Russia not to approach a corridor around 100 km wide on the Syrian-Turkish borders in the surrounding of Azaz town, noting that later it became clear that the intention behind it was only to ensure that this part of the borders can be used to continue supplying ISIS, Jabhat al-Nusra, and other terrorist organizations with arms and munitions from the Turkish side.

The Russian spokeswoman said “After all this, the Turkish leadership’s statements about respecting sovereignty of the states in the region and territorial integrity seem strange,” noting that the Turkish forces are present on Iraqi territory without permission from Baghdad, and now Turkey is trying to choose who must be on this spot or that one in Syria.

Zakharova called all partners of Russia to comply with the resolutions issued by the meeting of the ISSG in Munich with precision, in addition to calling for the full implementation of UN Security Council resolution no. 2254, and adherence to the principles agreed in the framework of the Vienna formula which constitute a realistic basis for the political settlement in Syria to serve the interests of all Syrians without exceptions.

Earlier, the Russian Foreign Ministry expressed concern about the aggressive acts by the Turkish regime towards Syria, considering that the Turkish shelling of Syrian territories is a support for international terrorism and a violation of Security Council resolutions.