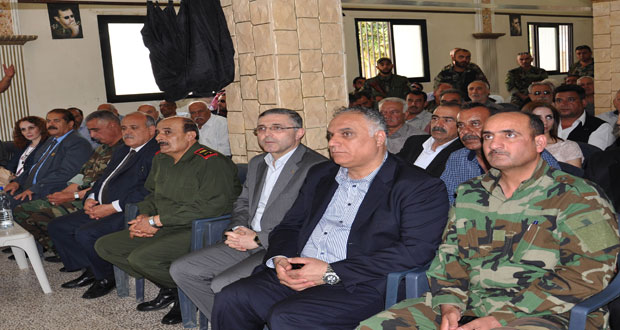 During the tour, Haidar said that locals can return to their houses in any area that is cleansed from terrorists after the government finishes rehabilitating the infrastructure in it, noting that a portion of the locals has already returned to the area, conveying a message to all locals to return as the area is now safe and secure.

Haidar also met a number of local figures in Rableh, Zeita, al-Houz, and al-Na’em in al-Qseir countryside, and they expressed their adherence to national unity and readiness to defend their hometown at all costs.

For his part, Homs Governor Talal al-Barazi said work to improve the infrastructure in the area is advancing in leaps and bounds, including work to repair roads and healthcare and education facilities, stressing that people of al-Qseir are united against terrorism and all attempts that aim at wreaking havoc or spreading sedition in the area.