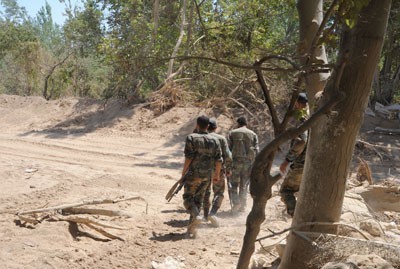 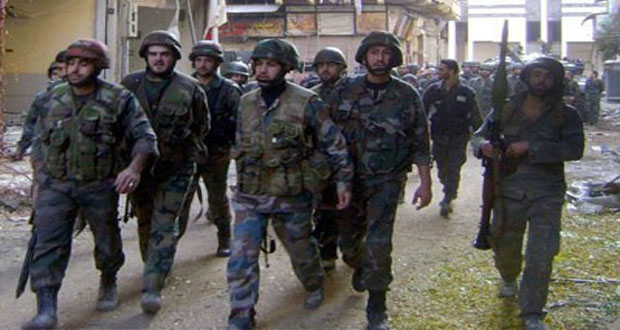 Provinces, (SANA) Army units eliminated Saturday armed terrorist groups across the country, killing and injuring a number of their members and destroying their hideouts, gatherings and weaponry.

A unit of the armed forces repelled and killed fleeing members of terrorist groups who tried to infiltrate the western plains of Rankous area and the areas surrounding the Lebanese al-Tfeil town coming from the direction of the Syrian border in Damascus Countryside, thus restoring security and stability to the whole region.

An army unit eliminated a gathering of terrorists in Jobar area, including non Syrians and a group leader, destroying their weapons and ammo.

In Adra al-Balad area, terrorists from the so-called Islamic Front were killed and others were injured east of Hajar Bin Odai shrine, while a terrorist hideout was destroyed in Block 11 in Adra Workers City and a car loaded with weapons and ammo was destroyed east of the Police Hospital in Harasta.

Many terrorists from Jabhet al-Nusra were killed, more than 20 were injured, and three cars equipped with machineguns were destroyed between al-Mleiha and Jisrin, while an army unit eliminated 10 terrorists and destroyed their weapons and ammo southeast of Ein Tarma valley.

Many terrorists were eliminated during an army operations in al-Nashabiye farms in Easter Ghouta, while another unit eliminated terrorists and injured others in Karm al-Rasas and Aliya farms in Douma area.

In al-Zabadani plain, army operations resulted in the death of many terrorists, many of them non-Syrians, in Rankous’ western plains on the Syrian-Lebanese borders.

An army unit killed terrorists, injured others, and destroyed hideouts along with the weapons and ammo inside them in al-Batra’a mountains near the town of al-Rhaiba in Damascus’ northeastern countryside.

Numbers of terrorists were killed in the operations, including a leader of Jabhat al-Nusra who is called Marwan al-Dakhil.

Units of the armed forces destroyed terrorists’ dens in the villages of Rahoum, al-Shendakhiyeh and Um al-Rish in the countryside of Homs, killing large numbers of the terrorists.

A military source told SANA that an army unit foiled an armed terrorist group’s attempt to infiltrate from Azizeh village to the safe areas in Aleppo countryside, killing and injuring a number of its members.

The source added that army units targeted armed terrorist groups in the old city of Aleppo and in Bani Zaid neighborhood in the city.

The army units also destroyed terrorists hideouts in several villages in Aleppo countryside, killing and injuring a number of them.

In Idleb countryside, the army units targeted an armed terrorists group’s dens near Bennish and eliminated a number of terrorists and destroyed three vehicles for them equipped with heavy machineguns.

A number of dens and gatherings for terrorists were targeted in the areas of Ein al-Qasab, Nahleh, Meriyan, Taoum, Saraqeb and al-Shughr in the countryside, resulting in the death and injury of many terrorists and the destruction of their equipment.

In Deir Ezzor countryside, army units destroyed terrorists’ vehicles and a warehouse containing ammo and weapons, eliminating a number of them and injuring others in the towns of Mohasan and al-Buomairo.