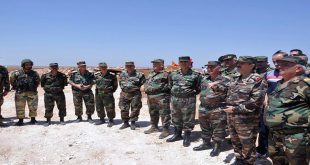 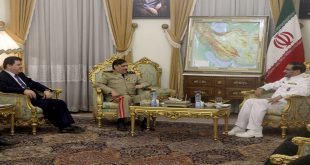 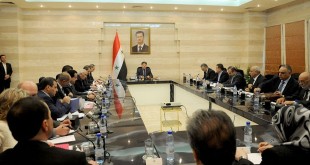 Damascus, SANA – Upon the directives of President Bashar al-Assad, Commander-in-Chief of the Army and Armed Forces, Defense Minister Fahd Jassem al-Freij visited an Air Force base in the southern region accompanied by a number of the army’s officers.

Minister al-Freij met during the visit a number of Syrian pilots and technicians in the base, heaping praise on their efforts and conveying to them President Bashar al-Assad’s love and appreciation for their heroism and courage in carrying out their national duties.

Al-Freij also visited a military site, met the soldiers and highly praised their sacrifices for eliminating terrorism in Syria.

The Syrian Army and Armed Forces will continue their missions in combating terrorism and frustrating the schemes of its backers, the minister added.

For their part, the soldiers affirmed that they will remain loyal to their goal of defeating terrorism and restoring security and stability to all Syrian lands.