Ambassador Aala: Passing non-consensual resolution by UNHRC against Iran is unaccepted departing from the Council principles 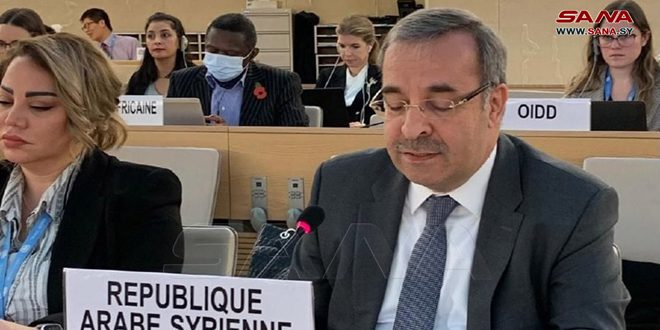 Geneva, SANA- Hussam Edin Aala, Permanent Representative of the Syrian Arab Republic to the United Nations Office at Geneva, reiterated Syria’s rejection to the Western States’ persistence to convert the United Nations Human Rights Council (UNHRC) and its facilities into tools for defaming and targeting countries of the South in campaigns instigated by political considerations.

In the 35th special session of the Human Rights Council on human rights situation in the Islamic Republic of Iran, Aala added that establishing mechanisms against Iran is a politicization of the Council works, which is unaccepted departing from the principle it is based on, underscoring that passing non-consensual resolution by UNHRC against Iran is unaccepted  act as well.

“Syria calls for abandoning these policies based on double standards that proved unsuccessful, along with their departing from the council role and tasks involved  in tackling human rights through constructive dialogue and international cooperation.”Ambassador Aala declared.

“Iran is adhered to the Promotion and Protection of Human Rights and to its positive cooperation with the related UN mechanisms”, Aala asserted, underlining that ignoring the breaches of human rights resulted from coercive measures imposed on the Iranian people is a politicization of the Council acts .

Ambassador Aala affirmed that Syria strongly condemns all acts of terror and violence directed against civilians and Iranian security forces, calling on the UNHRC to respect judicial process in Iran.

Aala Passing non-consensual resolution by UNHRC against Iran Permanent Representative of the Syrian Arab Republic to the United Nations Office at Geneva the United Nations Human Rights Council (UNHRC) 2022-11-24
Baraa
Share
Previous Ministry of Tourism, in an unprecedented step, announces discounts of up to 50% for accommodations
Next 10 people die in a fire in China’s Xinjiang region

One person killed in a car bomb explosion in Zaporozhye region

Moscow,SANA-One person was killed on Friday in a car bomb explosion in Zaporozhye province. According …