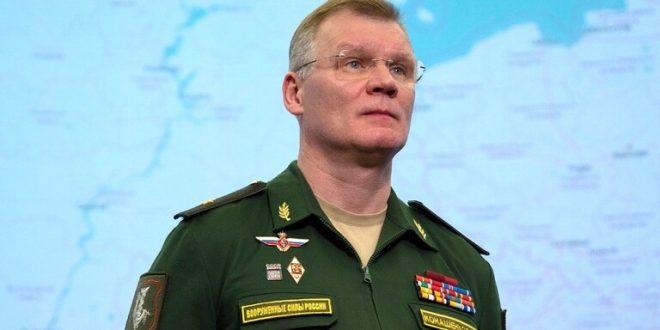 Moscow, SANA- Russian Defense Ministry said that heavy losses have been inflicted upon the Ukrainian forces while their attempts to consolidate at several areas towards Nikolayev direction.

Konashenkov added that high-precision armament of Russian Aerospace Forces has eliminated provisional bases of the units from 80th Air Assault Brigade and a munitions depot near Kramatorsk in Donetsk People’s Republic. Over 120 Ukrainian servicemen and 11 armored and special motor vehicles have been eliminated.

Konashenkov noted that Concentrated fire attacks launched at the positions of the units of 30th mechanized and 95 air assault brigades near Gusarovka in Kharkov region and Adamovka in Donetsk People’s Republic have resulted in the elimination of 110 militants.

He indicated that high-precision attack of Russian Aerospace Forces launched at 2 bases of foreign mercenaries near Kurakhovo in Donetsk People’s Republic has resulted in the elimination of up to 50 foreign militants.

Konashenkov announced that over the past 24 hours, operational-tactical and army aviation, missile troops and artillery launched attacks at 4 command posts, including: the headquarters of Kraken nationalist group near Kharkov, 66th Mechanised Brigade near Yelizavetovka in Donetsk People’s Republic, 65th Mechanised Brigade near Nikolskoye in Zaporozhye region, as well as 57 artillery units, 189 AFU manpower and military equipment concentration areas have been neutralized.

Three munitions depots near Seversk in Donetsk People’s Republic, Nikolskoye and Malinovka in Zaporozhye region have been destroyed.

Konashenkov said that 3 U.S.-manufactured HARM anti-radar missiles have been intercepted near Novaya Kakhovka, as well as 7 MRLS projectiles near Kakhovka hydroelectric power plant, including 4 HOMARS and 3 Olkha.

Konashenkov added that Despite the presence of IAEA representatives at Zaporozhye nuclear power plant, Kiev regime continues provocations aimed at posing a threat to create a technological disaster.

He pointed out that Russian electronic countermeasures means have blocked the arriving drones and forcibly made them throw grenades to secluded areas at over 1,5 km from the plant’s security perimeter.