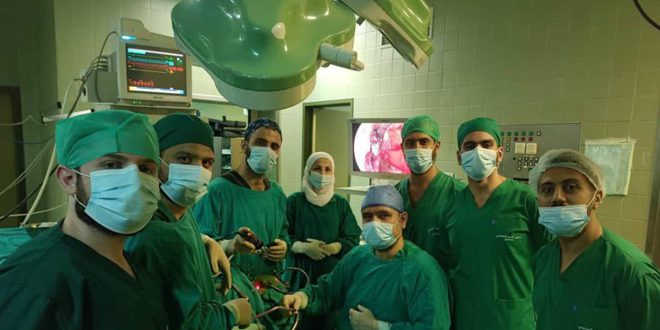 Damascus, SANA- A medical team at al-Assad University Hospital in Damascus has succeeded in performing a surgical operation on a 56-year-old woman, after three years of suffering from a chronic, disfiguring facial neurological disease that causes involuntary spastic movements such as recurrent eye closing with the contraction and deviation of the mouth, which led to the patient avoiding communication with the community as she has suffered from depression during the past years.

Dr. Basil al-Rumahen, a neurosurgery specialist who led the medical team to perform the surgery, said in a statement to SANA: “The patient underwent brain surgery in posterior fossa near the brainstem to release the facial nerve responsible for the movement of most facial muscles from the pulsating effect of the artery that is compressing it continuously and causing these contractions.”

He added, “This operation was performed completely through endoscopy procedure, and it is one of the very modern neurosurgery operations in the United States of America and Europe, and it was successfully conducted for the first time in Syria.”

Al-Rumahen added that the patient is in an excellent clinical condition after the operation with complete improvement of symptoms, which is the first time that she can look happily in the mirror in three years and return to her normal life.

He expressed thanks to the hospital administration, the Neurosurgery Division, the anesthetic, surgical and nursing staff, and everyone who contributed to the success of this qualitative and distinguished surgical procedure.