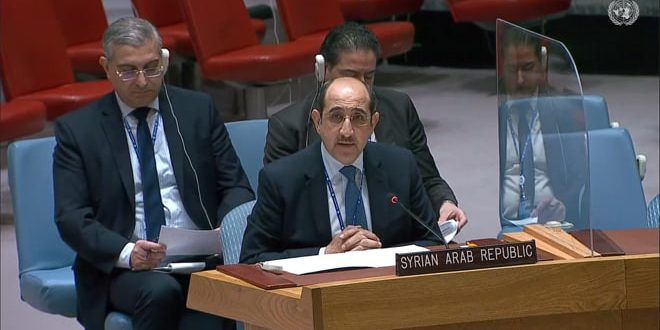 New York, SANA- UN Security Council (UNSC) has adopted on Tuesday a resolution on extension of the effects of the Resolution no. 2585 for the year 2021 for six months which includes delivery of aid from inside Syria via the routes and implementation of the early recovery projects along with the delivery of aid via one border crossing which is Bab al-Hawa border crossing.

The resolution stipulates for that extension of its effects for an additional six months necessitates the issuance of a new UNSC resolution that confirms this, which means that the extension is not automatic.

The negotiations resulted in the inclusion of electricity for the first time in the new resolution within the sectors included in the early recovery projects, due to its importance alongside basic sectors such as health and education.

The resolution includes monitoring and follow-up on the implementation of the projects through an interactive dialogue that takes place every two months.

In a statement following the vote on the aforementioned resolution, Syria’s permanent representative to the UN, Ambassador Bassam Sabbagh said that Syria has repeatedly affirmed that all matters related to its people are its sole responsibility.

Syria has demonstrated over the past years its keenness to ensure the access of humanitarian aid to the citizens in all parts of the country without discrimination or exclusion, and has succeeded in the most difficult times by allocating many convoys from the United Nations, the International Committee of the Red Cross (ICRC) and other humanitarian organizations to various regions, Sabbagh said.

He underlined that these efforts refute the allegations promoted by some hostile countries to justify the extension of the so-called” cross-border aid mechanism”.

He criticized that what was achieved today could have been achieved a few days ago, however, the political selfishness of three Western permanent members pushed them to misuse the Security Council again to blackmail public opinion by promoting a disinformation campaign aimed at defaming to Syria and Russia.

He said that these three countries seek to convey a false image of a bout their concern for the humanitarian situation in Syria while they stand behind the illegal and inhumane siege imposed on the Syrian people.

What Syria has requested through its delegation, in coordination with the friends in the Security Council, was to improve the draft resolution in a way that guarantees a good and balance response to the humanitarian needs aimed at alleviating the suffering of Syrians by promoting early recovery projects, especially in the vital electricity sector, which was included in the text of the resolution.

Sabbagh called for implementing the content of the new resolution in its entirety and without selectivity, discrimination or politicization.

On July, 9th, 2021, UNSC had adopted a resolution no. 2585 on extending the use of the Bab al-Hawa border crossing for humanitarian aid delivery for six months and the resolution was subsequently extended based on a report by the Secretary General of the United Nations another six months which ended the day before yesterday.