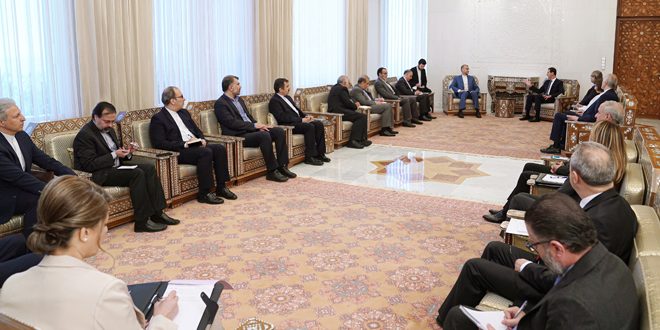 Damascus, SANA- President Bashar Al-Assad described the strong relationship that have been consolidated over the past decades between Syria and Iran as an “alliance of the will” in the face of Western efforts to dominate the world.

President al-Assad’s remarks came during a meeting with Iranian Foreign Minister, Hossein Amir Abdollahian and the accompanying delegation on Saturday.

The two sides discussed the bilateral relations, the common challenges, and the close cooperation that brings Syria and Iran together in various fields.

Abdollahian said that President al-Assad’s recent visit to Tehran marked a major turning point, and had profound consequences for the relations between the two countries.

Abdullahian said that the Israeli aggressions constitute one of the aspects of the terrorist war against Syria and seek to destabilize the country.

He reiterated his country’s firm position in support of Syria’s sovereignty and territorial integrity, and its rejection of any military action against the Syrian territory.

The two sides also discussed the Turkish regime’s policies and its threats to launch a new aggression against Syria, with President al-Assad considered that the Turkish regime attacks Syrian territory whenever the Syrian army advances against terrorist organizations.

His Excellency made it clear that Turkish allegations to justify its aggression on Syrian territory are false , misleading ,and have nothing to do with reality , as well as violating the UN Charter’s provisions, the international law’s principles and good-neighborly ties that should unite the two neighboring countries.

President al-Assad considered that the war in Ukraine unmasked the West and revealed its lies , and the political losses of the West constitute the beginning of a new international balance in the interest of Syria, Iran and all the countries and peoples that defend their principles, rights and sovereignty of their decision.

In turn, Abdullahian briefed President al-Assad on the talks that took place on the sidelines of the Caspian Sea summit last week, and the latest developments in the ongoing negotiations regarding the Iranian nuclear file. 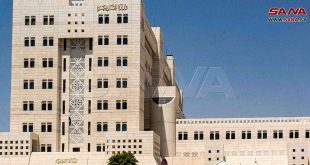