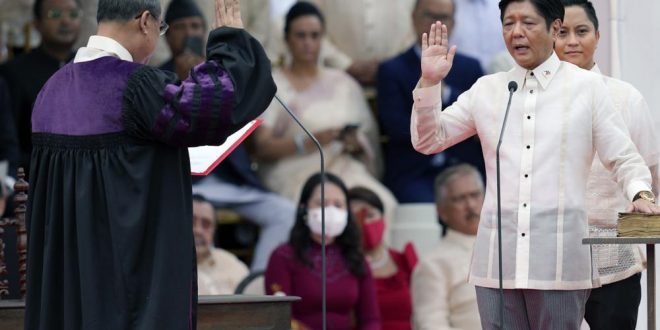 Manila, SANA-  Ferdinand Romualdez “Bongbong” Marcos Jr. took oath as the 17th President of the Republic of the Philippines, with a promise of promoting unity and bringing progress to the country.

Marcos, the son of the late former President Ferdinand Edralin Marcos Sr., was sworn in by Supreme Court Chief Justice Alexander Gesmundo at the National Museum of the Philippines in the City of Manila. In his inaugural address, Marcos vowed to fulfill his mandate to serve and protect fellow Filipinos.

The 1987 Constitution mandates the President-elect to take oath at noon on June 30, a ceremonial event marking the commencement of his six-year term as the country’s new chief executive.

Prior to the inauguration, Marcos met with his predecessor, outgoing president Rodrigo Duterte, at Malacañan Palace for the latter’s departure honors.