An international meeting on Syrian archaeological sites within Expo 2020 Dubai 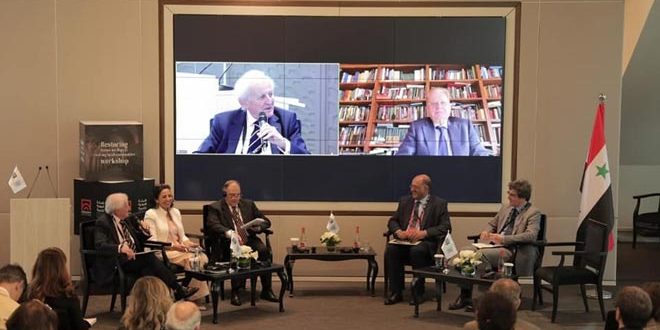 Dubai, SANA- The international meeting on the Syrian archaeological sites inscribed on UNESCO list began on Sunday in the Syrian pavilion at the Expo 2020 Dubai, with the participation of international experts.

The event held at invitation of the Syrian Trust for Development under the title “Restoring the Syrian heritage and reviving local communities”. Heads of missions and archaeological missions that helped discover, develop and promote the distinguished world heritage in
Syria participate in the meeting, according to a statement by the Syrian Trust for Development.

The participants will discuss the current situation of Syrian historical sites and the people live around them.

The meeting will focus on the tangible heritage and the six Syrian sites inscribed on the UNESCO list, including the historic city of Palmyra, the Citadel of Salah al-Din, Krak des Chevaliers castle or Qala’at al-Hosn, Bosra al-Sham, the ancient city of Aleppo, the old city of Damascus and a group of ancient villages in the northern Syria or what are known as the forgotten cities of Hama, Idlib and Aleppo, the statement noted.

The meeting will also focus on discussing priorities, means of cooperation and implementing plans related to the Syrian heritage, whose preservation is reflected in the protection of human heritage, as the Syrian part of it was placed on the List of World Heritage in Danger since 2013 ,and the danger is represented either by the theft and smuggling of Syrian antiquities by terrorist organizations during the war, the statement added.