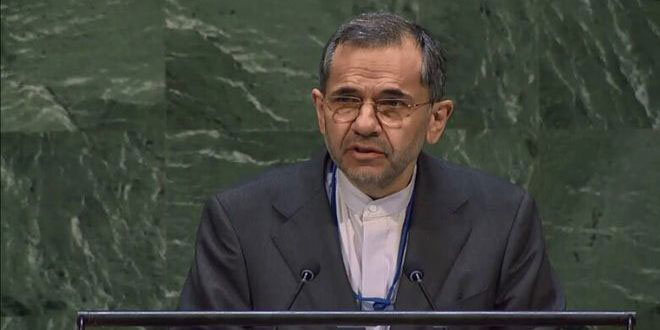 New York, SANA- Iran renewed the demand for immediate departure of the foreign occupation forces that are illegitimately existed on the Syrian lands and without preconditions, asserting the necessity to find a political solution to the crisis in Syria that respects its sovereignty and territorial integrity.

Iran’s Permanent Representative to the UN, Majid Takht Ravanchi, said during a Security Council session on Wednesday that the Syrian sovereignty and territorial integrity are violated either by occupying parts of the Syrian lands or by the aggressions of the Israeli occupation and the terrorists.

Ravanchi stressed that the suffering of the Syrian people is resulted from the occupation, the aggression and the illegitimate and inhuman, unilateral coercive measures imposed by the US and the Western countries.

He called upon the Security council to condemn the activities of the Israeli occupation entity in the occupied Syrian Golan, particularly the Israeli settlement expansion and to fore this entity to end its occupation of the Golan, indicating that any measure that aims at changing the legal and demographic status is null and has no legal effect under the international resolutions.