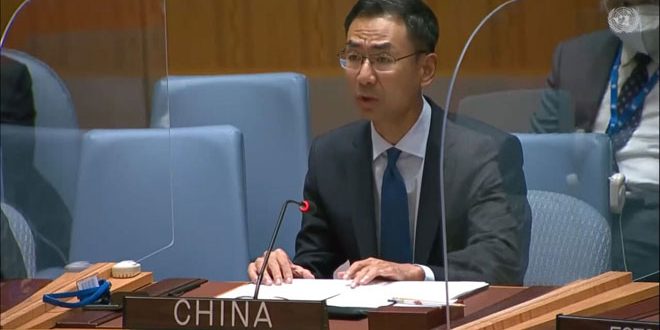 New York, SANA- China renewed its invitation to the Technical Secretariat of the Organization for the Prohibition of Chemical Weapons (OPCW) to adhere impartiality, objectivity and independence regarding the chemical file in Syria.

It is China’s consistent position that dialogue and cooperation is the right approach to the Syrian chemical weapons issue, Geng Shuang, China’s deputy permanent representative to the United Nations, told the Security Council briefing on Syria on Monday.

“We hope that the Technical Secretariat will adhere to the technical nature, uphold the spirit of impartiality, objectivity and independence in performing its duty and facilitate a return of attribution to the framework of the convention,” he said.

On the OPCW Investigation and Identification Team (IIT), Geng said that “the establishment of the IIT goes beyond the scope of the Chemical Weapons Convention (CWC) and runs counter to the OPCW’s tradition of consensus, over which many countries, including China, have expressed concern.”

He clarified that the working methods and procedures of the (IIT) have failed to meet the requirements of the CWC and its annex on verification thus raises multiple questions.

Geng said, “China stands firm in opposing the use of chemical weapons by any country, organization or individual under any circumstances or for any purpose, and hopes that our world will soon be freed of all chemical weapons.”

Syria’s permanent representative to the UN, Bassam Sabbagh, said on Monday before the Security council that some countries still politicize the chemical file in Syria, turning a blind eye to its cooperation with the Organization for the Prohibition of Chemical Weapons(OPCW), and direct baseless accusations against the country.