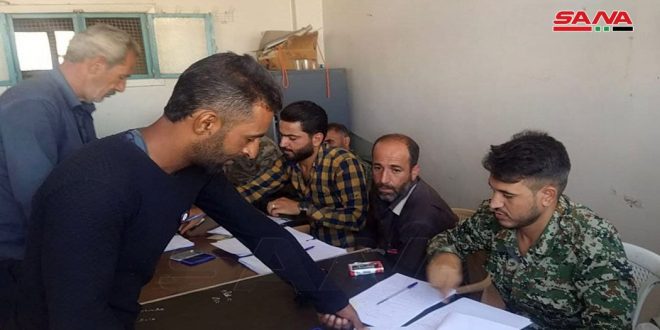 Daraa, SANA- According to the settlement agreement proposed by the State, the legal status of a number of gunmen, wanted persons, and military deserters were settled in Tafas city in Daraa northwestern countryside.

SANA reporter in Daraa said Saturday that the operation of settling the status of the gunmen, wanted persons and the military deserters began in Tafas city within the State’s efforts exerted to restore security and stability to the areas in Daraa western countryside. The reporter added that the competent authorities settled the status of scores of persons in the city and handed over some of their individual weapons, ammunition and RPG launchers and rocket grenades to the Syrian Arab Army.

In parallel, the Army units prepares to redeploy in different areas in the city to restore security and stability and in preparation to restore services and repairing the damage.

A number of Tafas dignitaries told SANA in a statement that settling the status of a nmber of wanted persons and restoring services to the city pave the way to the return of normal life and accelerate the return of agricultural production. In implementation of the settlement agreement proposed by the State to consolidate security and stability in Daraa province, the status of wanted persons and gunmen have been settled in Daraa al-Balad area, al-Yadouda village and Mzairib town, while thousands of locals returned to their homes in Daraa al-Balad neighborhood after the Syrian Arab Army has carried out redeployment in the neighborhood. 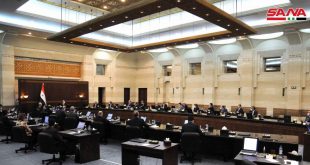 Damascus, SANA- The Cabinet endorsed on Tuesday a service and development plan for the areas …