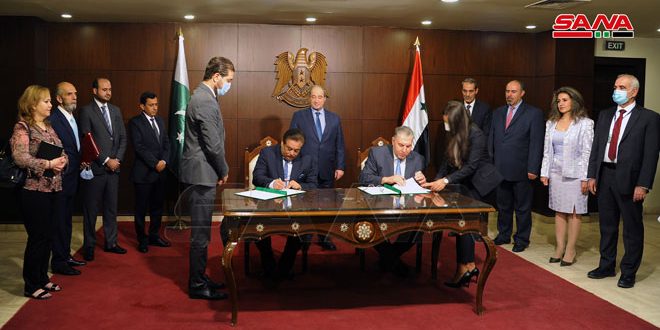 Damascus, SANA- Education Ministry on Sunday signed a protocol on verification of the certificates issued by University of Cambridge for the students of Pakistan International School in Damascus and ratification of them at the building of Foreign and Expatriates Ministry.

The Protocol was signed by Education Minister, Darem Tabaa, and Pakistan’s Ambassador in Damascus, Saeed Muhammad Khan, in the presence of Foreign and Expatriates Minister, Faysal Mikdad.

In a statement to journalists, Mikdad clarified that signing the protocol is a step in the correct direction, adding “we are also working to deepen bilateral relations between the two countries through other steps in the scientific and cultural fields, along with the mutual visits among the officials of Education and Higher Education Ministries through the upcoming period.”

For his part, Minister Tabaa pointed out that the protocol facilitates a lot of difficulties and enhances the relation with the Pakistani government that seeks to strengthen the educational relation with Syria.

In turn, Ambassador Khan talked about the importance of signing this protocol as it will positively reflect on students in terms of ratification of the granted certificates which will facilitate accepting them at universities inside Syria.