A stand in Tunis demanding to restore relations with Syria 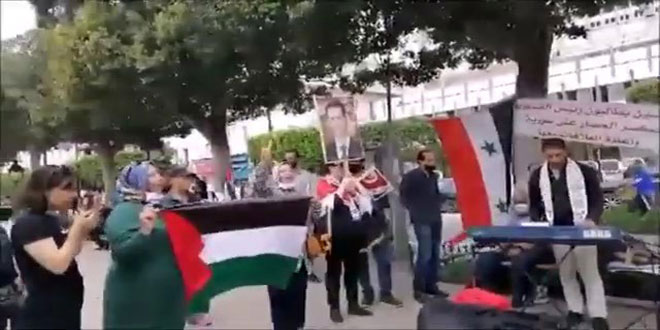 Tunis, SANA- A number of activists of Tunisian organizations and parties have staged a stand at Avenue Habib Bourguiba in Tunis, demanding to restore relations with Syria.

Head of Mediterranean Lawyers and Jurists Association, Hammadi Bakkar, said that this stand represents a continuation of the demands of a wide spectrum of the Tunisians to restore relations with Syria, and it comes in celebration of the Presidential entitlement which had been successfully done, and of the winning of Dr. Bashar al-Assad in the presidential election.

Ratibah al-Milladi, one of the organizers of the stand and Head of Wa’tasimu (Hold fast) Organization, noted that the demands to rebuild relations with Syria have not stopped, underlying the necessity for the Tunisian Government to meet this urgent popular demand.

Head of Syrian Community Committee in Tunisia, Talal al-Hassan, appreciated the Tunisian people’s demand to restore the Syrian-Tunisian brotherly relations, stressing that the success of the Syrian people in completing the Presidential entitlement and the winning of Dr. Bashar al-Assad have affirmed that Syria has remained steadfast and has triumphed in the face of the global war waged against it.

Hassan Ziyab, a Syrian resident in Tunisia and one of the organizers of the stand, said that restoring the Syrian-Tunisian relations has become an important national issue, asserting that Syria, despite all difficulties, today has achieved victory over all reactionary forces, and it has expressed its people’s will through completing Presidential election.

2021-06-06
rafah
Share
Previous Picking watermelon in Rakham village, Daraa eastern countryside
Next Syria condemns illegitimate entry of a Dutch and a French delegation into the Syrian territories in collusion with QSD militias