Hasaka, SANA- Gunmen affiliated to US occupation-backed QSD militia ran over two citizens by their cars in two separate accidents which took place in Tal Hamis and al-Waweya village in Hasaka countryside.

Civil sources in Tal Hamis told SANA that a car affiliated to QSD militia ran over a citizen, causing very serious injury to him.

The source noted that a car carrying militants affiliated to QSD militia ran over a citizen from the locals of al-Waweya village who was admitted to hospital and he is in a critical condition. 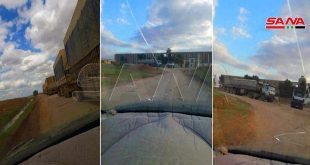